In the northwest corner of campus, the double-domed Strawbridge Observatory is, by day, a classroom, library, and lounge space. After sundown, however, the building opens its doors four times a semester to continue a Public Observing Program, which for years has offered a bridge between the College and the surrounding community. At the astronomy-centered gatherings, a team of Bi-Co students provide presentations, children’s programming, craft projects, and viewing of celestial objects with the observatory’s two telescopes, making for all-ages fun that anyone can enjoy.

“Public Observing is a really unique program at Haverford,” said Katie Billings BMC ’19, who has been involved with it for about two years. “For students like me who help create it, it provides a chance to share science with others, improve my organizational and public-speaking skills, and it connects me with the larger local community. For the local community, it provides an opportunity to learn about science and to engage with students and the work they are doing. And for students who attend our programs, it gives them a chance to engage with this awesome resource that is the Strawbridge Observatory.”

Public Observing activities vary from night to night, but when weather permits, students locate planets, nebulas, or star clusters using the 16-inch and 12-inch telescopes that sit atop the building. Downstairs, crafts activities (like building rocket ships or designing planets) are popular with the younger visitors. And after an hour or so, Haverford students practice distilling astronomical knowledge into broadly understandable terms by presenting on their research or something astronomy-related in the news.

This semester’s Public Observing is led by co-heads Milburn and Dom Rowan ’20 as well as Billings, who runs the group’s social media presence, activities head Julie Gonzales BMC ’20, and telescope lead Nathan Wolthuis ’21. On February 8 and March 1, the group worked with Associate Professor of Physics and Astronomy Karen Masters and other astronomy and astrophysics students to design programming, plan which objects to view in the telescope, and advertise to off-campus guests.

“Collaborating with students is probably the most rewarding part of this whole experience,” said Gonzales, a linguistics major. “Public Observing is an entirely student-led event, although we also have fantastic support from faculty… Even as a person who is not academically involved in physics or astronomy, I feel very welcomed and comfortable in this space, and I’m not afraid to offer suggestions about future themes or talks. I also think it is awesome to have students propose ideas in a meeting and then see them enacted by students with the end goal of teaching others more about science and hopefully sparking some scientific inquiry.” 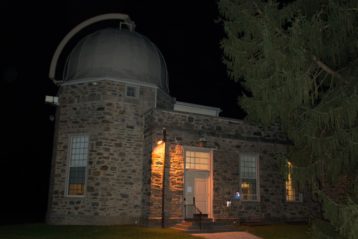 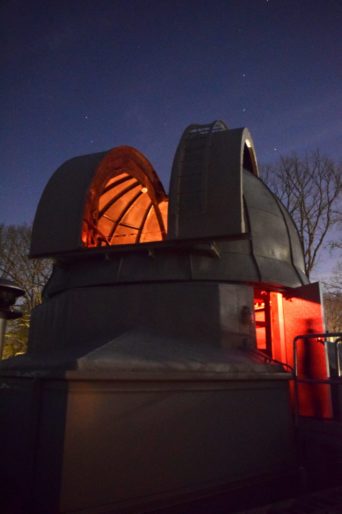 Student volunteers lead a constellation tour in the night sky on the roof of Strawbridge Observatory during a public observing event. Photo by Sarah Jennings ’21 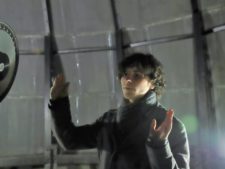 Nathan Wolthuis ’21 giving a tour in the observatory. Photo by Lily Xu ’19. 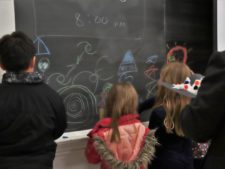 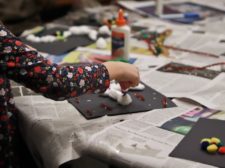 Though there is inherent joy in being able to look up into space for students interested in astronomy, there is something special about being able to share that with visitors from beyond campus. Making science fun and accessible is a goal across scientific fields, but it’s a major focus of the students who make Public Observing possible at Haverford.

“Public outreach has always been key for astronomers,” said Rowan. “In general, I think it can be difficult to understand the value of astronomy. It’s not like biology or computer science, where we can see direct applications of current research in daily life. Larger space agencies like NASA and the European Southern Observatory work hard to capture public interest and keep people engaged in what research is being done. We can contribute to this broad objective through programs like Public Observing. Not only is it a great way to show off the telescopes we have at Haverford, but we also have the chance to get the community excited about astronomy. This is especially important for the young kids that come to the public observing night. Most families don’t have a 12-inch or 16-inch telescope in their backyard, so this is really a unique opportunity to spark their interest.”

Attendance usually hovers around 50 people at most Public Observing nights, with higher turnout at major events like this past January’s Lunar Eclipse. Besides Bi-Co visitors, local families, scout troops, and school groups often make the trip out. Two more events will take place this semester: on Friday, March 29 at 8 p.m. (with a rain date scheduled for the following Friday), and on April 26 at 7:30 p.m., when Haverford will host a Franklin Institute Citywide Star Party, which last year drew hundreds of visitors.

With creative new ways to pique interest in the contents of the night sky, Public Observing will continue a unique continuity between Haverford, the surrounding community, and the cosmos.

“It’s amazing that Haverford has this building and these telescopes, and it’s important that we have a chance to share them with students and families,” said Billings. “There’s nothing I love more than when someone looks at something through a telescope for the first time and their reaction is just ‘Wow!’ It’s very exciting to see space in a new way and Public Observing provides that.”