Haverford’s classrooms, auditoriums, and rehearsal rooms ring out with the sounds of musical talent all year long, but especially at semester’s end. In the northeast corner of campus, Union Hall and Roberts Hall host the music library, music faculty offices, rehearsal rooms, and performance spaces in the McCrate Recital Hall and Marshall Auditorium. But these aren’t the only places where you can hear a melody or beat on campus.

The last few weeks of the semester are concert season at Haverford. In addition to end-of-course recitals for classes such as “Introduction to Piano,” other performances include concerts by the Bi-Co Orchestra, Chamber Music, Chorale, Chamber Singers, and usually all nine a cappella groups. It’s a time of year when the diverse musical talents of the Haverford student body are on full display. Especially for a small college, the depth of this talent has a special character.

“The sense of community-building is very important,” said Associate Professor of Music Heidi Jacob, who has helped grow the instrumental ensembles at Haverford for 22 years. Jacob, as director of the Bi-Co Orchestra and Chamber Music, has seen students from a variety of backgrounds develop as musicians on an individual level, but also stresses the group skills needed to work in a musical ensemble. One quote that resonates with her comes from John Chesick, the late former professor of chemistry at Haverford and a cellist: “Orchestra is the ultimate team sport.”

“Community building is not just learning to play together, not just the physical actuality of playing, but also learning to give and take… Being able to be empathic to what’s going on around you and listening to what other people are doing are also part of community building,” said Jacob.

One example Jacob pointed to was Chamber Music, a collection of eight-to-ten small ensembles comprised of roughly 30 students. Chamber Music ensembles meet weekly by their own accord to rehearse under their own direction, cooperation, and leadership. Similar student initiative extends well beyond Chamber Music on campus. All a cappella groups rely entirely on their student members to arrange and rehearse their music, and it’s not uncommon for Haverford students to pick up some instruments and play in a band, either. The Bi-Co Jazz Band, with support from Visiting Assistant Professor of Music Leonardo Dugen, welcomes members with any or no experience, and has grown from nine members last semester to 18 this semester.

“Most of us are pretty into jazz and jazz fusion, but we all also have other musical interests. I know there are some funk players out there, as well as a few of us who have been in indie rock bands and such,” said Henry Nye ’20, the jazz band’s current president. “It’s a blast being in the band, and we welcome new jazzers of any skill level.” (Continued after the gallery.) 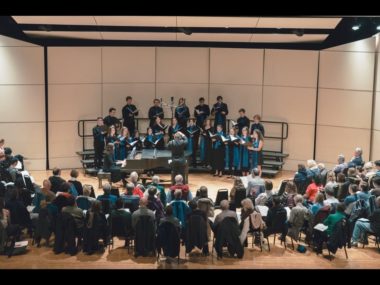 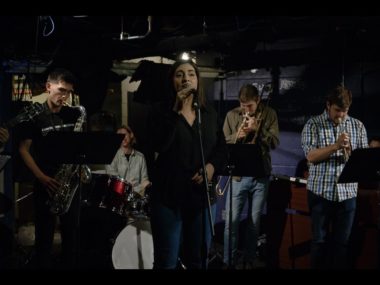 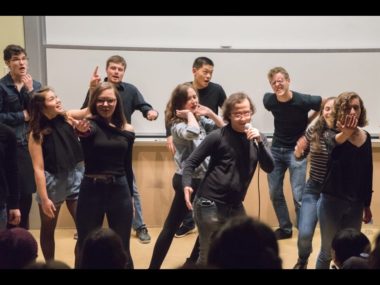 The Mainliners perform in Stokes Auditorium for their 2018 Fall Semester Show. Photo by Ruiming Li ’22. 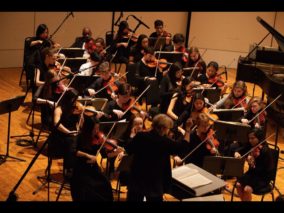 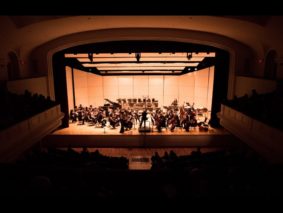 Participating in music at Haverford looks different for each student. Grace Coberly ’21 has enjoyed taking music classes, being on the student advisory board for Chamber Singers, and leading the Mainliners, an all-gender a cappella group. At Haverford, Coberly has found a place to bring her lifelong love of music to a community that supports her endeavors, such as her plans next semester to pursue an independent study by conducting a piece for Chamber Singers.

“It’s all really accessible,” said Coberly. “[Music] is a very small department, so all the majors know each other, we know all the professors, and there are a lot of resources for a small number of students. So there’s always a lot to do and always new opportunities. And the department is really into trying new things.”

Emily Lin ’20, a computer science and linguistics double major and neuroscience and Spanish double minor, enjoys playing piano with the Orchestra and Chamber Music and especially values the flexibility of the latter group.

“I really appreciate the fact that my music experience has catered to my schedule and needs,” said Lin. “[For Chamber Music,] Heidi always asks for our schedules first and then schedules lessons and concerts based on us.”

Georgia Meyer ’19, who has played violin and viola in the Orchestra, Chamber Music, and in the pit band for the student theater group Greasepaint, has appreciated the opportunity to participate in music at Haverford without needing to compromise other commitments.

“I believe that Haverford music is unique because it draws many talented musicians despite the fact that we aren’t a music conservatory,” said Meyer.

In student-led groups, meeting members where they are and adapting to individuals’ time commitments requires communication and collaboration. Jai Nimgaonkar ’19, who leads the College’s oldest cappella group, the Humtones, has found challenges and rewards in the process.

“Most people in a cappella are also pursuing degrees that do not intersect with a cappella, so it helped me understand how to set realistic expectations,” said Nimgaonkar. “It’s been extremely rewarding, and I’m grateful to have had a cappella in every one of my four years here.”

Nate Zullinger, assistant professor of music and director of choral and vocal studies, is new to the Haverford community as of August, but has already appreciated the College’s musical communities in his direction of Chorale and Chamber Singers. Chorale, comprised of over 100 Bi-Co students, alumni, and nearby community members, offers something different than Chamber Singers, a group of around 30 students with prior musical experience. Both groups, however, rely on members’ talents, commitment, and collaboration.

“The things that have impressed me in the time I’ve been here are the natural curiosity and inquisitiveness and ability of students to wrap themselves around a project, to invest, to get involved, and really take ownership of the things they do,” said Zullinger. “That’s a really striking impression that both of the schools have made on me, both Haverford and Bryn Mawr.”

New musical facilities currently in planning stages will also give the variety of talented musicians at Haverford additional ways (and places) to hone their craft. Revitalized facilities will become the home of the Bi-College Department of Music and a comfortable base for student musicians, faculty, and guest artists. So, soon enough, there will be expanded performance spaces to play host to the many concerts that come around at this time of year.