Responsible for the event were Chinese natives Shucheng Guo ’19 and Yueru Li ’19, co-heads of the campus chapter of the North American nonprofit organization Global China Connection (GCC). Gratified by the impressive turnout, their colleague and countryman Xiangruo Dai ’21, who serves as GCC’s media coordinator and public relations representative, counts it as an unequivocal success.

“We hosted 80 people in total,” he says, “and love that so many people on campus spent Saturday night with us enjoying Chinese food and learning about Chinese culture.”

Among those 80 was Peter Cruz Parrilla ’20, who stepped out to support his fellow students who are far from home.

“I know that, sometimes in my darkest days, all I need is a warm plate of food from home to keep me going,” says Cruz Parrilla, who is from Puerto Rico. “So, I recognize the importance of giving international students who grew up on the cuisine, or a similar one, represented that piece of home feel they may need or just want. It’s also important to bring together people who either are connected by the similar cuisine from home or by an interest in exploring and expanding their horizons with a new cuisine.”

Dai concurs on this point.

“One of goals for this event was to provide authentic, familiar Chinese food for Chinese international students,” he says. “Many of them are far away from their families for the first time, and we hoped that this event can give them a welcoming environment to enjoy authentic Chinese cuisine abroad.” (Continued after the gallery.) 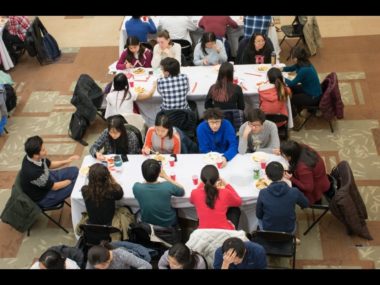 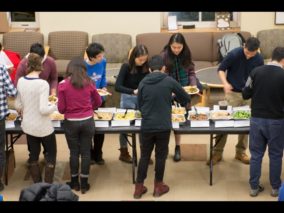 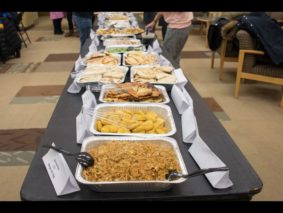 Besides that, he adds, “We wanted to provide all Haverford students with the opportunity to explore parts of Chinese culture and cuisine they [would] usually not be exposed to. By providing the unique Xi’an cuisine experience to the Haverford community, GCC hopes to break the stereotype about ‘Chinese cuisine,’ [meaning] American-style Chinese cuisine.”

Billed as a “Taste of Xi’an,” it focused on the distinctive culinary tradition of the Northwestern Chinese city in question, which is the capital of the Shaanxi Province and, as Dai notes, “a city of diverse cultures with a cuisine influenced by different ethnic groups.” These include a heavy emphasis on noodles of both rice and wheat varieties and a liberal hand with kitchen spices like cumin—two of Cruz Parilla’s favorite dishes, in fact, were on the hotter side.

“I really liked the spicy chicken noodles and spicy cucumber,” he muses. “I could literally just eat that every day!”

This dinner is the second in a series of Chinese cuisine-focused events put on by GCC, following last year’s “Taste of Guangdong,” which spotlighted Cantonese food. The theme of next year’s dinner is still to be decided, though Dai names Beijing, Shanghai, and Sichuan cuisines as likely contenders. Whichever prevails, one thing’s for sure: Cruz Parilla will be there to enjoy it.

“I think these events are quite important as everyone leaves being positively impacted by it, in my opinion,” he says. “[I’ve learned] that food is a major way to learn about a region, and I hope these events dedicated to regional cuisines keep enlightening me about the diversity of East Asian cuisines.”