This past Saturday morning, Haverford STEM majors flocked to Sharpless Hall to ring in the 14th annual Undergraduate Science Research Symposium with a continental breakfast buffet, courtesy of the Koshland Integrated Natural Sciences Center. By 9:30, however, the focus had shifted from food to fieldwork, and Zubrow Commons was abuzz with the sound of scientific exchange: students and professors from colleges across the Tri-Co and beyond sharing insights from their summer research.

One such student was math major Laura Seaberg ‘20, one of four Fords chosen to present their findings to a public audience. Though somewhat nervous at first, as it was the first time she’d “given a talk to a group of people from across all the sciences rather than just math,” Seaberg rallied to the occasion admirably.

“I spent this summer conducting math research at the Mathematics Research Experience for Undergraduates at Lafayette College,” she says. “Essentially, our projects dealt with paths on the Sierpinski carpet, which is a fractal that looks like a square with a bunch of smaller squares cut out. We studied the area of triangles made by a specific type of path on the fractal. Even though this fractal has been relatively well-studied, our research on paths and triangles takes the inquiry in a new direction.”

Alongside Seaberg, David Zegeye ’19, Emma Bullock ’19, and Scott Pollara ’19 also presented on their research in he fields of physics, chemistry, and biology, respectively. In total, 73 different posters–spanning subjects from “pupillary and neutral reactions to performance error“ to “marine drug discovery” to the “correlation between stellar tidal disruption events and extreme mass ratio”–were shown over two hour-and-a-quarter-long sessions. KINSC Associate Director Marielle Latrick, who’s spent much of the past two months organizing this year’s symposium, was gratified by the diversity of scientific research on display.

“It’s a wonderfully exciting event to see all the students proudly presenting their summer work,” she says. “Each year, I’m consistently impressed with the breadth of STEM representation in the room.”

A flagship event in the KINSC’s annual calendar, the symposium–a major venue for scientific exchange between Philly-area colleges–has showcased roughly a thousand student posters, spawned countless research partnerships, and cemented its place in Haverford’s hard sciences scene in the nearly-decade-and-a-half since it was first held. 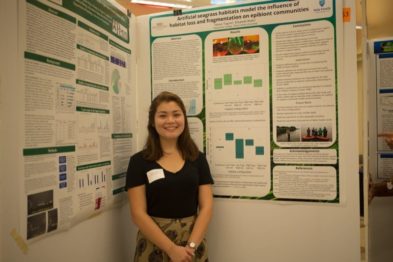 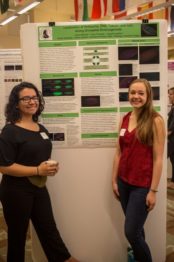 Juliana Benitez ’20 and Grace Pindzola ’20 in front of their poster. Photo by Cole Sansom ’19 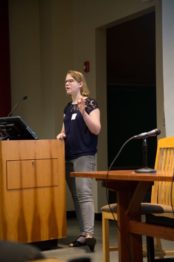 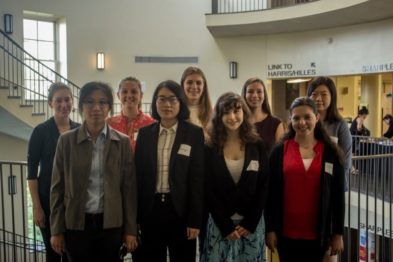