With all the busy-ness of finals, Commencement, and year-end move-out you’d be forgiven for not taking note of a new structure being built at the corner of Carter and Harris roads. But the next time it’s pouring rain and you’re waiting for the Blue Bus to Bryn Mawr you’ll certainly be glad for it. The building, a small, wooden, covered bus stop and bike shelter, was designed by two rising seniors majoring in growth and structure of cities, Austin Huber and Nicky Rhodes, whose passions for design and building otherwise manifest in their work as co-heads of the Bi-Co Architecture Club.

“We first met during our sophomore year in an architecture studio taught at Bryn Mawr. It was in this class that we learned the basics of architectural representation as well as the importance of an iterative and responsive approach to design,” wrote Huber and Rhodes in a joint email. “Thanks to the Facilities Fund and the generous support of [College Architect] Dave Harrower, Haverford’s Committee for Environmental Responsibility, the President’s Office, and Facilities, we were fortunate enough to have the incredible opportunity to exercise and build upon these skills outside of the classroom.”

The building project was finished in the last week of classes and a ribbon-cutting ceremony was held on May 10, but the new Blue Bus shelter was more than a year in the making. Huber and Rhodes were inspired to propose the project after a rainy commute to Bryn Mawr back in February 2017. Previously the North Dorms bus stop consisted of only a small bench that provided no shelter from the elements.

They submitted their proposal to the Facilities Fund, which annually offers students the chance to refresh existing and create new community spaces on campus. After receiving approval, they embarked on an intensive design phase—with Harrower as an advisor—determined to create not just coverage from the rain for Bi-Co commuters, but a structure that would reflect Haverford’s rich architectural character.

While still in the design phase, they joined forces with the College’s Committee for Environmental Responsibility (CER), which is developing a campus bike-share program and was looking for a place to store the shared bikes. So Huber and Rhodes expanded the scope of the project to include bike storage and maintenance.

Inspired by the late 19th-century Victorian architecture of SEPTA’s Regional Rail stations and the Haverford faculty residences that line College Lane, the two students designed a small but stately structure with a gabled roof and several multipaned windows. It has a patio, sheltered waiting area with seating, a covered rack for both personal and bike-share bikes, and air pump and bicycle “fix-it” stations.

“We worked closely with Dave and a local engineer to create a design that was structurally viable,” said Huber and Rhodes. “To actually construct the project, we hired an Amish contractor, whose expert craftsmanship ultimately produced the beautiful timber-frame structure.”

While some landscaping around the building is still being finished, it is otherwise complete. And when students return in the fall it will be waiting to keep them dry in a storm as they wait for the Blue Bus to Bryn Mawr.

“When we first began this project over a year ago, we never could have anticipated what an incredible experience it is to stand inside a structure that once existed just in our minds and as thumbnail sketches on the back of our homework,” said the student designers. “It was surreal for us to watch our design evolve from a plan on a piece of paper to a physical space. The feeling we had when we first laid out the site with spray paint and wooden stakes was incomparable to that felt as our project seemingly grew from its foundation and eventually took on its full dimensions. Stepping inside the completed structure for the first time induced an emotion that we may only describe as a combination of amazement, satisfaction, and gratitude.” 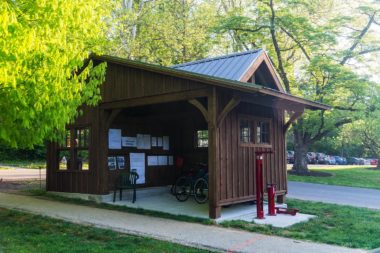 The view from the back of the structure. Photo by Patrick Montero. 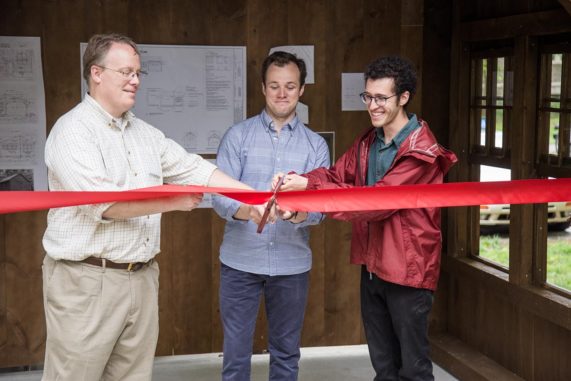