Not long before Commencement, the third annual Chesick Scholars Dinner celebrated the members of the Class of 2018 graduating after a four-year academic mentoring and leadership program for high-achieving students from groups that are traditionally underrepresented in academia.

The “Chesick III” cohort of 16 graduates included four recipients of College Honors, five recipients of departmental Honors, five winners of Commencement prizes, and a member of Phi Beta Kappa. Faculty, staff, and donors applauded their success, and the positive impact the Chesick Scholars make on Haverford.

Beginning with an interdisciplinary residential program during the summer before their first year, the graduating Chesick Scholars formed a close-knit group. Cristian Espinoza ’18 said, “The relationships I gained from my summer experience include some of my closest friends, interlocutors, and mentors. It gave me a family—a wildly talented, intellectually excellent, yet still whacky family committed to its members’ success. I am so honored to be a part of it.”

Jennifer Jolivert ’18 agreed. “I fostered really good relationships with other Chesicks that summer. It was really nice to come into Haverford with a solid support system,” she said. “We’ve grown so much, and I can thank each and every one of you for being a positive influence during my personal journey.”

“One of the most important messages I’m taking with me to the next phase,” Jolivert continued, “is to not be afraid to ask for help. I’d like to thank all of you for getting us to reach our potential up to this point. I know that I’ll be able to move forward and be successful thanks to all of the work put into this program.”

Sabea Evans ’18 noted, “I could not have been a Haverford student if I were not first a Chesick Scholar. It can be a long journey in understanding and accepting a support system of people who truly see the best in you, but it can be even harder to see it in yourself,” she said. “Haverford can be a tricky place, but it has also been a door to so many opportunities for learning and new experiences that I’m excited to encounter.

Director of the Multicultural Scholars Program and Senior Lecturer in Mathematics and Statistics Jeff Tecosky-Feldman, who spearheads the program, summarized the pride felt by the mentors and donors who have invested in the success of the Chesick Scholars. “You’ve changed this place for the better, just as we hoped.”

A multi-million grant from the San Francisco Foundation funded the program’s first five years. Additional donors, including Jane and William Macan IV ’64, who attended the dinner, helped fund the continuation of the Chesick Scholars Program. “As with all big dreams, establishing a program of strong academic support to underrepresented students and a centralized office for academic help required significant resources to make it happen,” noted Vice President for Institutional Advancement Ann West Figueredo ’84. “This is a truly exciting evening and a very proud moment for Haverford College.” 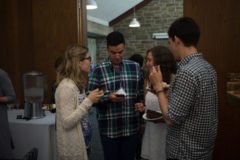 Sabea Evans ’18 spoke about what being a Chesick Scholar means to her.

Cristian Espinoza ’18 was one of three student speakers and spoke of the importance of friendship and cohort building. 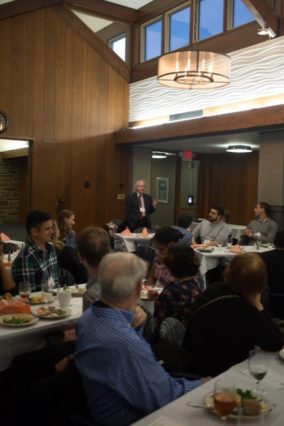 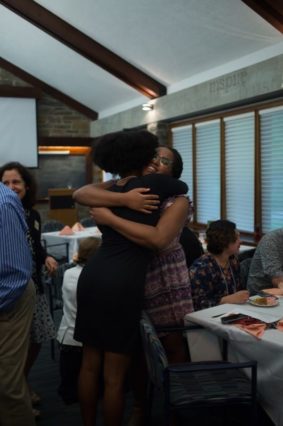