The annual Black Students’ League (BSL) Fashion Show is always an exciting event on campus. This year was no exception; the line to get into the packed Visual Culture, Arts, and Media (VCAM) building stretched all the way across Founder Green. Such a turnout was due to the fact that the show took a new twist this year, focusing more on an art exhibition and performances centered around the beauty of the black skin and body, rather than its usual focus on fashion designers and clothes.

“In the past we’ve [showcased] actual designers, but this year we decided to be more creative and instead of finding designers, we decided to be designers ourselves,” said Kiamani Wilson ’18, one of the BSL board members who organized the event. “The clothes we bought were donated to the Village of Arts and Humanities afterwards.”

The event was dubbed RECLAIM, and it featured an exhibit of photography by Alliyah Allen ’18, several dance performances, spoken-word poetry, and projected video pieces, one of which was Mecca Harris’ short films Liberation, which also screened at the 2017 Tri-Co Film Festival, and Ascend.

“Across the African diaspora, melanin-filled skin defines the attention and perspective that is taken by the external world,” wrote the BSL in their promotional material for RECLAIM. “Historically and presently, that same perspective has been used to oppress and objectify black bodies to violence and bondage. In response to such brutality, BSL is producing an exhibition that will RECLAIM the black body to generate pride, love, and gratitude. In our performance and glorification of beautiful and lively black skin, BSL aims to make a cultural impact on Haverford College and beyond with our exhibition.”

For many of the students on the BSL board—which includes Allen, Antwain Golson ’20, Addison Conn ’20, Hadiyyah Graves BMC ’18, Lillian Alonzo ’20, Mercedes Davis ’20, Mecca Harris BMC ’20, and Travis Grant ’20—RECLAIM was their first BSL fashion show. (Last year, the group hosted the Black Love formal instead.) It was also the first time it was moved from its usual home in Founders Great Hall, which is currently acting as an interim library during Magill renovations. But VCAM, with its soaring ceiling, dramatic raised walkway (formerly the Old Gym’s raised track), and open space (which allowed for the bigger crowd), was an excellent host.

“We were thinking about space and what we could achieve on this campus, with all the renovations going on,” said Allen, who was not only responsible for all of the show’s photography, but also acted as its artistic director. “So we couldn’t do a traditional fashion show, like we’ve done in the past… [but] looking at VCAM as a creative space for the entire campus to experiment with, we thought, ‘Let’s do an exhibit in VCAM.’” (Continued after the gallery.) 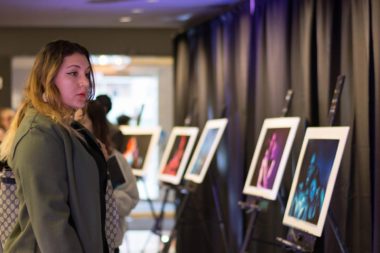 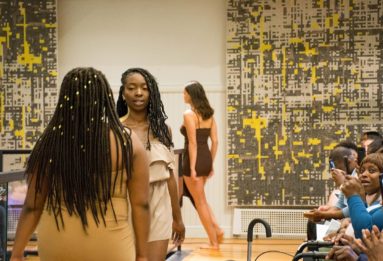 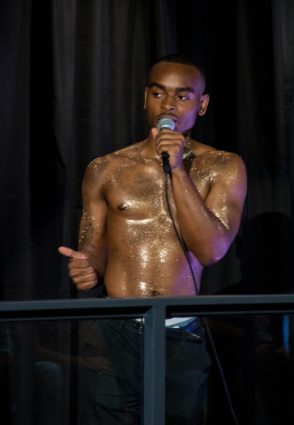 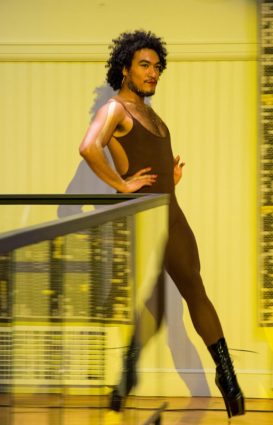 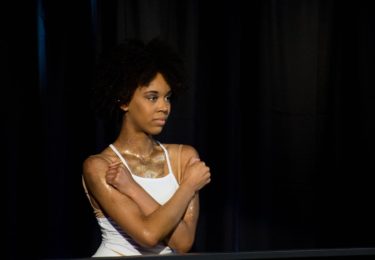 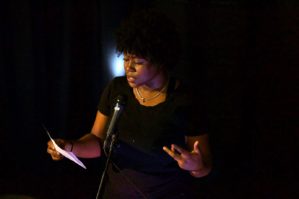 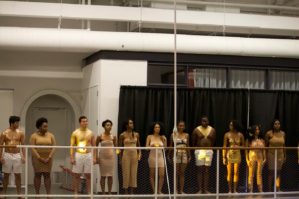 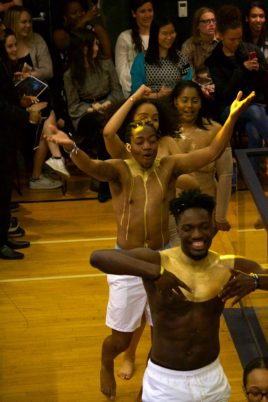 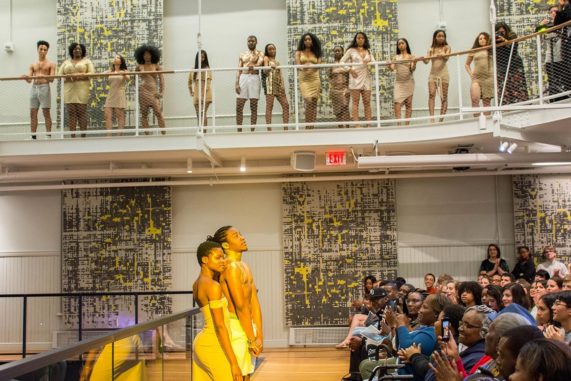 Two weeks prior to the event, Allen set up in VCAM’s new studio space and took advantage of the lighting and backdrops to create dazzling photos of the models involved in the show. The photoshoots began in the morning and went late into the night. The resulting photos helped give the fashion show a cohesive aesthetic.

During the epic photoshoot, which involved lighting gels, glitter paint, and make-up artists, Allen photographed nearly 70 students and took over 6,000 photos. With the quick turnaround between the shoot and the show, she edited quickly, and, in the end, displayed 600 pieces in the photo exhibition, in projections during the show, in the “look book,” and in marketing and promotional materials. Seeing people’s responses to her images—and noticing the photo subjects sharing her photos on social media—brought Allen a lot of joy.

“It was not easy to produce, but I was super proud of my team and super proud of the creative and collective energy that we were able to pull together to accomplish that,” she said.

Mentioning her gratitude to the VCAM, HCAH, and the Instructional Technology Center staff, Allen said that one of the things she loves about Haverford is all the resources available to students. (Such resources allowed her to create two other photo shows last fall: an exhibition of her work in VCAM, Shine, which served the purpose of archiving womxn of color; and a portrait series, Fruit, highlighting black and brown faces on Haverford, Bryn Mawr, and Temple’s campuses.)

“The way I see it, for me as a black female artist, a huge part of my process if really showing people and their stories and their truths—whether it’s pain, happiness, or something in between,” she said.

“For me, one of the biggest highlights of [RECLAIM] was seeing everyone come together,” said Travis Grant ’20, one of the current BSL co-heads and a Horizon Student Resource Person for 2017–2018. “Even though we’re a small campus, you don’t get to spend quality time with a lot of the students and members of the black community. I feel that we’re all so focused on our individual quests of why we’re here, we’ve got schedules, we’ve got classes, some of us have sports, etc. There are so many things going on that it’s hard for us to come together, as a group as a community. We wanted to emphasize that it was family time. We came together, we had fun, there were lots of smiles, lots of laughs, lots of jokes shared. Throughout the whole process, we bonded, and that was really important for me. The whole aspects of coming together and showing the campus that we were capable of doing something really amazing.”

Antwain Golson ’20, who performed a spoken-word piece in the show, also noted that his favorite part of the experience was the sense of community he felt.

“For me, that was this moment of support and solidarity from the whole campus,” he said. “That was beautiful.”