On April 26, students and community members were welcomed into a classroom in the Visual Culture, Arts, and Media (VCAM) facility for a lecture by neuroscientist/artist Greg Dunn. Working at the intersections of art and science, intuition and observation, Dunn came to the College to share what drives his art and his experience in creating the enormous and dazzling piece Self Reflected.

On display at Philadelphia’s Franklin Institute, where it hangs permanently on a wall of glass, the artwork’s magnitude alone is a massive feat. The brain’s neural transmissions, marked in gold leaf by a technique called reflective microetching, map the microscopic behavior and pathways that neurons would take while the brain is visually stimulated by a work of art. So, in essence, the piece is depicting the exact thing going on inside your head while you are taking it in. The artwork took Dunn and his partner, artist and applied physicist Brian Edwards, two years to create from conception to completion.

The hallmark of the piece was the intricate microetchings, a technique invented by Dunn and Edwards, which enable three-dimensional displays of information on an otherwise two-dimensional piece. The technique manipulates the hand-drawn, fractal pattern of neurons to elucidate a reflective “choreography” of neural activity– made possible by 600 lines of computer code. Microetching “allows you to turn coloring into an infinite variable, each color has its own channel of reflectivity,” said Dunn. “These give a more specific image of what the brain does.” In this way, Self Reflected serves as an illustrative bridge that links our usual imagining of a pink, wrinkled, three-pound brain to the actual microscopic behavior of the neurons responsible for generating what we do and how we think.

“It was so beautiful [and] exact,” said Nyla Robinson ‘21, who is considering majoring in Psychology. “When Greg panned across this pulsing, glowing brain that he constructed I froze in awe.”

While Dunn shies away from the term “science art,” he admits that the label would fit nicely to much of his work. With all of his pieces, he is pursuing  a simple paradigm, the inclusion of scientific content into pieces that are emotionally, aesthetically, and stylistically engaging. His goal: to promote awareness for concepts that can often be frustratingly inaccessible and esoteric.

Much of his art blends both the abstract and systematic. Often, they include neurons dispersed into fractalite patterns, like the branches of trees–a style Dunn reproduces by blowing paint across the flat surface of a paper. His work often ties back to his love of neuroscience. From a piece that displays the structured cross-section of a spinal cord to that of a hippocampus, reflective microetching usually inform the viewer of the pathways that neurons might take.

Fellow neuroscientist and Assistant Professor of Psychology Laura Been was excited to bring to campus someone like Dunn due to his perch at the nexus of art and science. “Dunn’s art, particularly a piece like Self Reflected, allows people to see and understand the complexity of the brain in a way that is intuitive, engaging, and beautiful,” said Been.

The intersection of visual art and scientific data also served as a basis of interest. “One of the things that we were most excited about was the way that Dunn’s interdisciplinary work maps onto some new developments at Haverford,” said Been. “With the recent formation of the visual studies minor and the construction of the new VCAM facility, our academic community is really engaging with the idea of visual representation. Thinking about about how these new programs and spaces can interface with the natural sciences is something that I am excited about, and Dunn’s work provides a successful model for this type of interdisciplinary approach.”

Dunn’s lecture was sponsored by the neuroscience program and the visual studies minor in conjunction with the Distinguished Visitors Program. 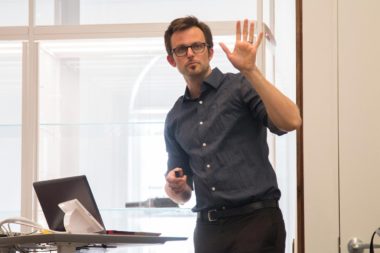 Distinguished Visitor Greg Dunn displays images of the human brain during the “Self Reflected” talk held in the VCAM. Photo by Claire Chenyu Wang ’20

Distinguished Visitor Greg Dunn displays images of the human brain during the “Self Reflected” talk held in the VCAM. Photo by Claire Chenyu Wang ’20 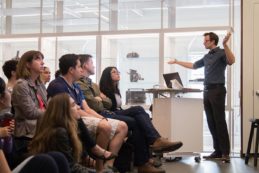 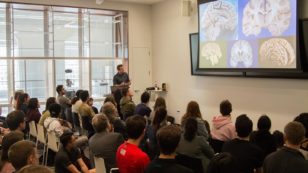