Since the student-run Women in STEM (WIS) club was revived in 2015 it has played host to numerous campus events. The club has sponsored talks by MacArthur “Genius grant” winners and Churchill Fellows and organized a mentorship program that runs throughout the year. But on March 31, they presented their first ever Tri-Co Coding Symposium. It was open to all experience levels and genders and was focused on developing new student skills in a workshop.

“There is a lot of interdisciplinary interest in computer science at Haverford,” said Harika Dabbara ’20, who proposed the event. “The symposium gave students an opportunity to explore the field and figure out where they want to take their interest, whether that is committing to a class or continuing to attend events like this. The other goal of the event was to provide a platform for networking and bringing the community together. Students were able to get to know each other and get advice on steps other people took.”

Monique Byars ’19 and Skyler Ellenburg ’18 co-led the workshop on Arduino robots in Python & C++, in which students learned about the hardware and software.

“It was really cool to see Monique go over the hardware side of the Arduinos because that’s not something I have had a lot of experience with in the past,” said Dabbara. “This really set up the work we did with the software because it gave us a better background, in my opinion.”

Those workshops followed a a morning keynote talk by Erica Greene ’10, who has worked as a software engineer at Etsy and The New York Times and now works as a research fellow at Jigsaw, a technology incubator created by Google and now a subsidiary of Alphabet. She is also a longtime supporter of the women in STEM fields.

“‘Coding’ is a word that gets thrown around a lot,” said WIS Co-President Maya Behn ’18. “It can sound intimidating, and it does not always bring to mind spaces in which women have a big presence. We wanted to give all students a chance to see and hear advice from an incredibly successful woman working in computer science—a Haverford graduate who could be a role model to students here now. We also focused on building and emphasizing the community of women who code at Haverford, asking current students to host workshops and serve on a panel, and having a lunch where people with similar interests could make new friends.”

Though Behn ‘18 was one of the organizers of the event, she was also new to coding. “I had never written a line of code in my life,” she said. “Can’t say that anymore.” (Continued after the gallery.) 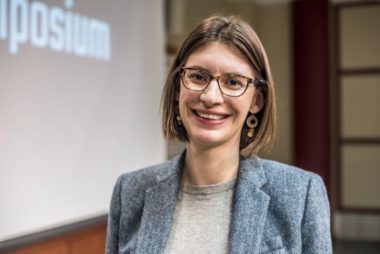 Skyler Ellenburg ’18 and Monique Byars ’19 co-led a workshop on Arduino robots in Python & C++, in which students learned about the hardware and software.

Students in a workshop on Arduino robots in Python & C++.

Attendees took a workshop on Arduino robots in Python & C++, in which they learned about the hardware and software.

Working on Arduino robots in the student-led workshop. 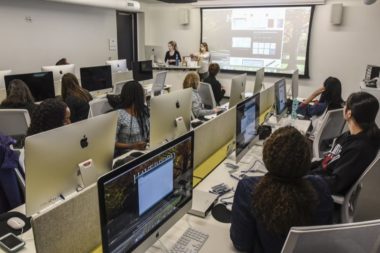 Monique Byars ’19 and Skyler Ellenburg ’18 co-led a workshop on Arduino robots in Python & C++, in which students learned about the hardware and software. 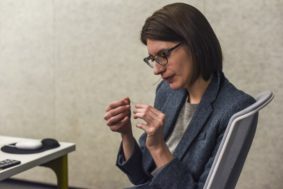 Erica Greene participates in the workshop. 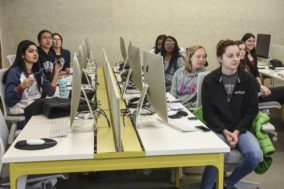 Students at the Women in STEM Tri-Co Coding Symposium. 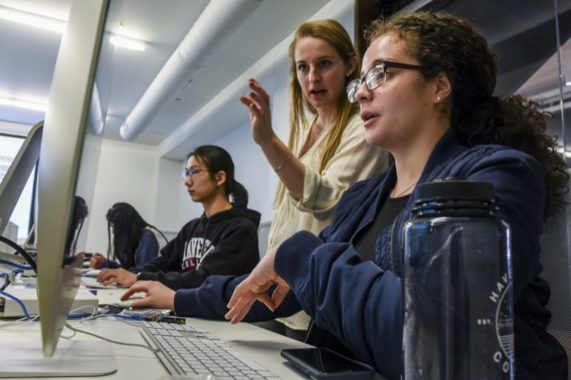 After the workshop, there was a lunch for attendees to meet one another and learn more about computer science at the three colleges and in the professional world. For Claudia Nguyen ’18, a member of WIS since its 2015 rebirth, the conversations shared over lunch were the highlight of the day.

“Whenever we have those moments where we’re all talking and connecting with one another, I think it’s really valuable and rewarding,” she said.

Then it was time for a panel discussion featuring Haverford women majoring in computer science speaking about their experience navigating the major, sharing advice, and answering questions.

“I really loved the experience of getting to talk to other women who are interested in CS, especially because I felt like I had tangible advice to give them based on my experiences in the CS major at Haverford, advice I probably would have liked to have gotten when I was younger,” said Becky Lytle ’18, one of the panelists.

Lytle, Skyler Ellenberg ‘18, and Maddy Hodges ‘18 spoke to the panel attendees about their thesis topics and processes, their favorite classes, opportunities they thought younger students should seek out while at Haverford, and how non-CS classes have better informed their understanding of various CS-topics. Lytle also talked about her participation in the 4+1 program at Penn, which allows students to receive a bachelor of science degree from Haverford and a master’s in engineering from Penn in five years.

“In the act of giving advice and sharing stories of lessons learned and failures, I realized how much I did know and how far I have come since freshman year,” said Lytle. “Most of the conversation was about the classes we struggled with and how we got through them. I think each of us stressed that there was at least one class in which we felt like the only way to get through was to develop a growth mindset instead of a fixed mindset. That is, focus more on what you can do and learn in the moment and not get overwhelmed by how much else we don’t know yet and have faith that eventually we will reach that point. It was exciting to talk to underclassmen about computer science courses because as a senior… I am fairly removed from this group.”

This coding symposium was only the latest event in what has been a busy year for WIS. At the start of every year, the group hosts a meet-and-greet geared towards first- and second-year students and they invite all of the women professors in STEM fields at Haverford. The goal of the event is to help students meet the professors whose classes they might take in the future so they can start forming relationships early. Last year the group piloted its mentorship program in which upperclass WIS volunteers guide and counsel first- and second-year students.

“I’m just really proud of how much WIS has grown in just a few short years,” said Nguyen. “I think we’ve been able to host some really awesome events, connect women with one another, establish a strong mentorship program, and we will only continue to grow in the years to come.