As the fading afternoon light cast across the painted walls and windows of James House, an actor gazed at a warthog and asked, “Is he beautiful?” The scenes that followed traversed years of childhood and adolescent self-discovery of a boy born with wings. It was an intimate setting, with friends and family present, for Rory Kennison ’18 to present Ugly, his thesis project that took the form of a two-act play.

Kennison decided early on in his Haverford career that he wanted to pursue an independent major in theater, and after taking playwriting and acting courses in Bryn Mawr’s Theater Department, his studies have culminated in a play that explores the lives of young people grappling with their own identities. Instead of writing a theoretical paper or producing an entire performance, Kennison presented the work last Saturday as an hour-long staged reading, followed by a question-and-answer session.

“I want that step further for people,” he said. “I want to really hammer in the ideas that I have. Also, a lot of the play is about my childhood, and I experienced my childhood through cheesy church plays and theater.”

The play’s story follows the life of Felix, who was born out of a flower that was bespelled by a witch at the request of his parents. Felix comes of age in physical possession of wings, which his parents refuse to let him remove or hide. The first act jumps non-chronologically from scene to scene as Felix comes to learn about and eventually reject his wings with the help and support of his friends, Mike and Olivia. The second act continues linearly, as Felix decides to surgically remove his wings and faces rejection from his parents. 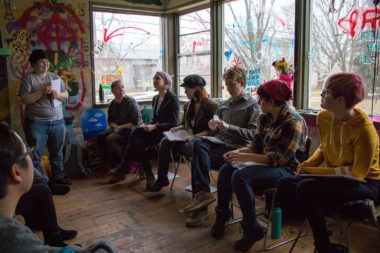 Ugly eloquently captures moments of childhood innocence, perhaps most tangibly when Felix and his friends, at age seven, try to see if he can fly by jumping on a trampoline and reciting the famous Harry Potter spell “wingardium leviosa!” Just as moving were its moments of gravity, culminating in a climax that sees Felix’s wings removed while snippets of other characters’ previous lines fill the silence with words of rejection or ambivalence.

Without a stage or much by the way of costumes, the play’s moving delivery relied greatly on its seven student actors, and of course, on Kennison’s writing itself. Kennison is no stranger to the dramatic medium after acting in multiple mainstage productions at Bryn Mawr and writing skits for his a cappella group, the Mainliners. Saturday’s staged reading reflected themes from the writer’s own identity experiences as well as years of meaningful engagement with a theater curriculum.

“Theories behind theater and theory behind different kinds of acting were really what interested me,” he said. “Studying theater for me is less about just being on stage and more about really studying the nitty-gritty.”

Though it wasn’t a full production, the cast and audience both found joy from engaging with the little details and prevailing motifs throughout the play. One attendee shared that even without all the amenities of a full production, it was easy to “see” the effects and blocking just through the words, stage directions, and performances.

After making its debut at Haverford, Ugly will soon move to a number of high schools in the area, which Kennison hopes will help adolescents who might relate to Felix digest the play’s meditations about coming of age and coming to peace with themselves. He has worked with young people in the past, teaching theater at schools during the summer in his native Baltimore. Now considering multiple job offers in the field of theater education, Kennison may be making a vocation out of his interest in bringing theater to young people.