Valentine’s Day and sugar go together like Cupid and arrows, but a basic heart-shaped box of chocolates doesn’t cut it at Haverford. That’s why Fords Against Boredom (FAB) hosts what has become an annual tradition: Love Shack’s graham cracker house-decorating competition. It’s a chance to indulge your sweet tooth with your sweetheart or your suitemates while exercising your creativity.

Fords came hungry for a win (and some candy) to this year’s event, which was held Saturday, Feb. 10, ahead of Valentine’s Day, in the Coop. Teams turned out iced castles with licorice drawbridges and Swedish fish-bejeweled turrets, houses with colorful Starburst-bricked facades, and even edible versions of campus landmarks, like a Hershey’s-kissed Tritton Hall and a tasty-looking Founders Hall. That confectionary interpretation of Founders, in fact, created by Miranda Behrends ’21, Claudia Ojeda ’21, and Sally Pearson ’21, won the night’s big prize of $40 for “Best Overall” creation, as well as the $20 award for being, obviously, “Most Haverfordian.” Other winners of $20 prizes included Dennis Grencewicz ’20 and Achint Singh ’19, whose delectable “Philly Auto Show” cars earned the “Most Creative” accolade; and Caroline Steliotes ’18, Kelly Waychoff ’18, Benjamin Yellin ’18, and Emily Chazen ’18, whose Tritton Hall was named “Most Structurally Sound.” 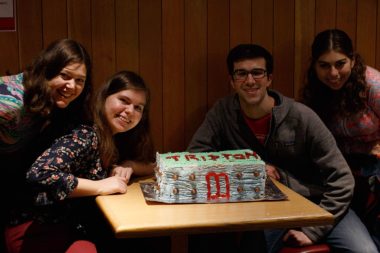 The “Philly Auto Show” creation, which won “Most Creative.” 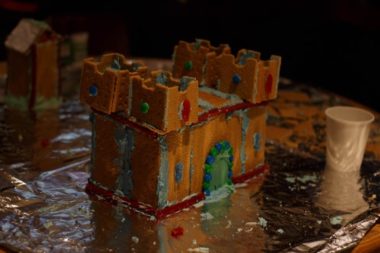 Close-up of a graham cracker castle with turret. 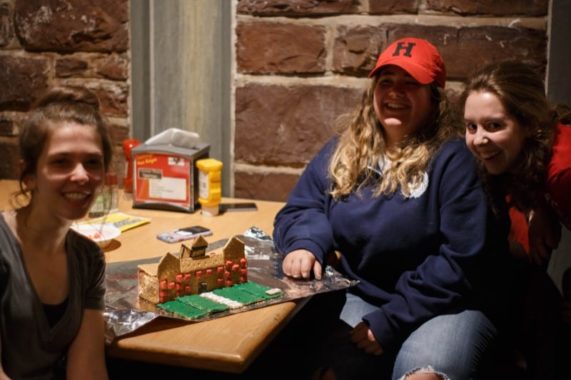 From left to right, Miranda Behrends ’21, Claudia Ojeda ’21, Sally Pearson ’21, winners of the Most Haverfordian and Best Overall with their recreation of Founders.