In a year of many new beginnings—the opening of the Visual Culture, Arts, and Media building, the impending renovations of the library—the Haverford Department of Biology quietly added to the roster with the launch of its first-ever film series this fall. Assistant Professors Kristen Whalen and Jonathan Wilson and Associate Professor Rachel Hoang, along with other faculty members, organized three screenings this semester in the hopes of supplementing students’ biology coursework—specifically, by allowing them to see the ways in which biological concepts transcend lab and classroom environs to influence daily life.

Much careful thought went into the selection of the films, whose focuses range from the macrobiological to the microbiological, from our evolutionary past to the detrimental effects of modern materialism on our present. ​The first one shown, ​Chasing Coral​, was concerned with the effects of global warming, such as “the perilous rise in sea temperatures,” on the world’s coral reefs. The second, ​Your Inner Fish​, focused on the evolutionarily evident “interrelatedness of all life on the planet.” The third, ​The Fly Room​, was “a historical piece about the famous fruit fly research lab at Columbia” that was—and is—directly responsible for the prominence of fly genetics in modern-day biology.

However, the professors didn’t intend the film series to be an intensive session of note-taking—far from it, in fact. “​We hope that watching these films in a more relaxed atmosphere will free the students up to simply sit back and enjoy the shared experience of watching the films together and that this will allow them to draw connections and find meanings of their own,” said Hoang. “We then follow up each film with the opportunity for discussion.” (Continued after the gallery.) 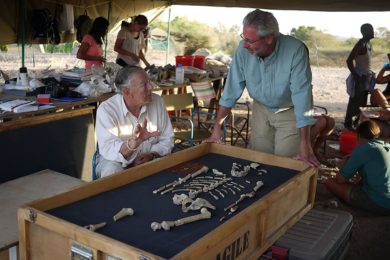 In this still from Your Inner Fish, Don Johanson (left) and Neil Shubin discuss the fossilized bones of “Lucy,” a 3.2-million-year-old hominid that was able to walk on two legs.

Neil Shubin interacts with a squirrel monkey in a still from Your Inner Fish.

A film still from the Fly Room. © Imaginal Disc 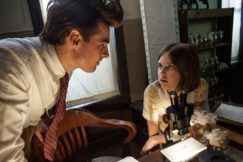 A film still from the Fly Room. 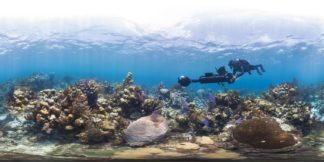 The series represents part of a broader effort by the department to “incorporat[e] other kinds of experience into [learning], such as hands-on lab experiences in previously lecture-based classes… as well as a variety of field trips,” Hoang says, citing the recent visits to local museums and the Camden Adventure Aquarium taken by Whalen’s ​“Advanced Topics in the Biology of Marine Life”​ class and her own “Evolution and Development” course, as well as “the incredible travel experience offered in conjunction with the CPGC for Wilson’s ​‘Plants and People/Economic Botany’ class​,” as examples. “As the traditional classroom boundaries continue to blur, adding this film series to [the department’s] offerings is also a natural extension of this trend towards more diversified teaching and learning.”

However, the film series wasn’t intended to just attract STEMstudents; it was an attempt to engage every members of the Haverford community, including those who shy away from all things scientific, with both the practical and theoretical aspects of biology. “The idea arose out of discussions we had last year in our department meetings about how to engage students on campus in biology outside of our classes and across class years,” Hoang says. Particularly, Whalen and Hoang wanted to give current first-years, many of whom may be still be exploring their academic interests, the chance to “interact with faculty, staff, and [biology] majors and to hear more about the research and interests in the department…​ since biology is not taken until sophomore year.”