The act of writing poetry—plumbing your most private feelings for art—is one that itself demands a measure of courage, and the act of reading poetry aloud—to an audience of strangers, nonetheless—is, surely, even more so. The acclaimed writers Joan Larkin and Robert Hershon, who read a selection of their poems last Thursday in the VCAM Screening Room to a nearly-full house, are doubtless well aware of the personal vulnerability poetry necessitates. Invited by Haverford Visiting Assistant Professor of English Thomas Devaney, himself a poet, their subject matter ranged from the confessional to the comedic and everything in between: poems dealing with abortion, aging, and death were followed by those written in the absurdist vein Lewis Carroll used to such great effect, and vice versa.

Indeed, the two poets acted almost as foils to one another: Larkin was more serious in tone and subject, generally, while Hershon’s poems, in contrast, were threaded with a stitch of wry humor, finding the funny side to the small moments of shared pathos scattered invariably throughout all our lives. When asked to sum up Larkin’s poetry in one word, Devaney, a former student of Larkin’s, doesn’t hesitate: “Embodied,” he says. “From her poems written in the wake of the AIDS crisis to her hymns to the body, Joan Larkin’s poetry is alchemical. Each line is a life-line. The hard-won truths of the life fuel the tremendous tension and release of Joan’s art.”

Larkin herself sees the value of reciting poetry to an audience, rather than reading solely from a printed page, as rooted firmly in human physiology: “Our response to poetry starts in the body,” she says. “The rhythm of the words and the pleasure of the sounds.” Hershon sums it up rather more plainly: “Reading poems aloud brings something new to the poem…You hear things that you might not hear otherwise.” Indeed, Devaney describes Hershon’s work as “located in the pace of his steps and stride of his voice. [Hershon] is a walker in the city who is evoking whole worlds through places, names, and the miracle of being there.”

As present in the moment and concerned with the here and now as Hershon’s work is, though, he is also concerned with the existential implications of his art—and the same can be said of Larkin. As Hershon asks plaintively in his poem “Goldfish and Rose:” “Must [the artist] die and must his work rot before all of Paris notices his creation?” Well, not in this case: a small but significant portion of Haverford—a community not as flashy or exotic as Paris, but a community nonetheless—was there last week in the VCAM Screening Room to bear witness to both his and Larkin’s respective bodies of work. 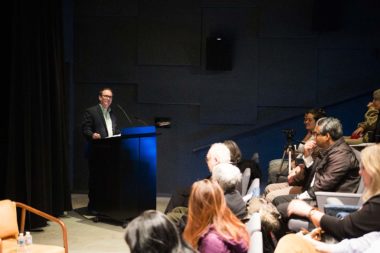 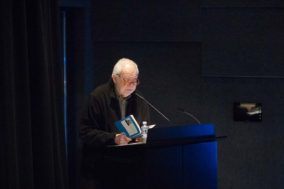 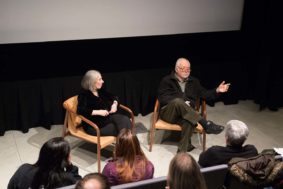