As if last weekend’s schedule wasn’t packed enough—thanks to Family & Friends Weekend and Homecoming—it also featured the openings of two new art exhibits on campus. On the evening of Oct. 27, the Cantor Fitzgerald Gallery celebrated Futureproof, a show that gathers work from contemporary artists with real-world images and archives from governmental and corporate scenario planners to explore how we have imagined (and continue to imagine) different futures, with a reception and a gallery talk by curator Ingrid Burrington. Meanwhile, a few yards away in Marshall Fine Arts Center’s Atrium Gallery, the Department of Fine Arts unveiled Keeping in Touch, a joint show featuring the works of Shannon Murphy BMC ‘14 and the paternal great-grandmother she never knew, Kathryn Bennett.

Though it wasn’t intentional, the two exhibits nicely complemented one another since one has its eye trained on the future and the other is in conversation with the past.

Futureproof, supported by the John B. Hurford ’60 Center for the Arts and Humanities, features the work of Morehshin Allahyari, Salome Asega, Gui Bonsiepe and the Cybersyn Project, the United States Department of Energy, Ilona Gaynor, Ayodamola Tanimowo Okunseinde, the Shell Corporation, and The Guantánamo Bay Museum of Art and History. Its title refers to the engineering or industrial design process of creating something to avoid or slow its technological obsolescence, and so it includes a 1991 in-house film on climate change produced by the Shell Corporation and archival documents from the real-life cybernetics economy-management operation of Salvador Allende’s Chilean government alongside works that sprung from artists’ imagination.

Keeping in Touch showcases roughly a dozen colorful cotton quilts and meticulous needlepoint canvases made by Murphy’s great-grandmother and shown alongside her own contemporary responses, which are made of wood and various fabrics and embellished with screen-prints, paint, crochet, lace tatting, weaving, and collage. Murphy was inspired by the traditional handcrafts Bennett made and began trying out those folk art techniques in non-traditional ways, using modern materials and her more surrealist eye. The result is a showcase for meticulous processes, inter-generational connection, and, as Murphy herself says, “the complicated relationship between past, present, and future that we are all a part of.”

Scenes from the Futureproof opening: 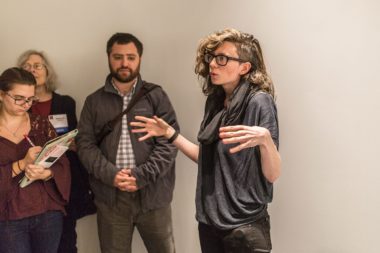 Curator Ingrid Burrington speaks at the opening of Futureproof in the Cantor Fitzgerald Gallery.

Curator Ingrid Burrington speaks at the opening of Futureproof in the Cantor Fitzgerald Gallery. 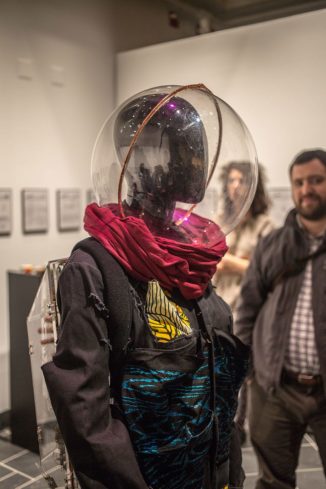 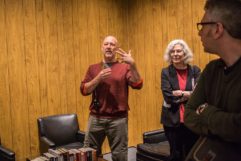 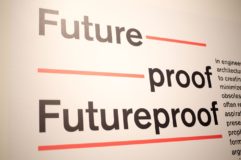 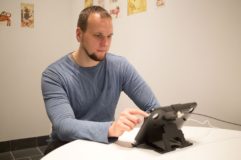 Students interacting with the art in Futureproof.

Scenes from the Keeping in Touch opening: 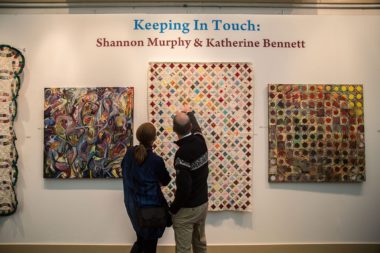 Visitors at the opening of Shannon Murphy’s show.

A student at the opening of Keeping in Touch. 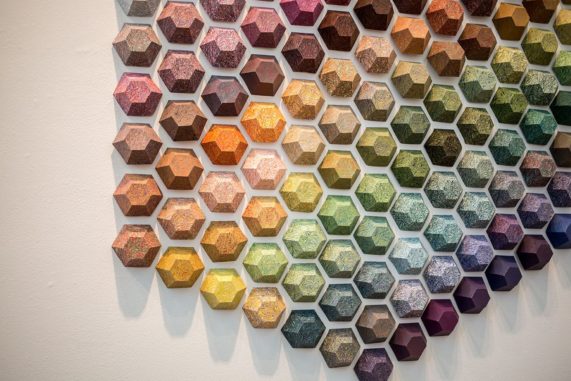 Some of Shannon Murphy’s work in the Atrium Gallery.