Over fall break a group of nine students and one young alum travelled to Boston to attend Harvard University’s Igniting Innovation Summit, the largest undergraduate conference on social innovation in the U.S.

The trip was led by Victoria Merino ’20, who is the head of the Haverford Innovation Platform’s (HIP) student group. The group is a subunit of HIP, a new program this year that is run out of the VCAM building that encourages strategic problem-solving and creative thinking through workshops, campus visitors and funding efforts. These events and opportunities are designed to support social engagement and help students develop entrepreneurial skills.

The student-run subgroup was originally founded by students Ian Andolsek ’17 and Nathan Sokolic ’19 during the 2016–17 academic year to better address students’ needs and interests within the area of entrepreneurship. The group is now run by Merino, but she is in the midst of establishing a steering committee for next semester, in which students have already expressed an interest.

Merino initially became interested in HIP last year, after attending a design-thinking workshop where she met founders Andolsek and Sokolic. Today, she works closely with Shayna Nickel, the HIP manager, to figure out how the student group can best complement the activities Nickel organizes.

“What’s advantageous about this collaborative relationship is that while the Haverford Innovation Program looks to bring broad-based skills and tools to the community, the student group can focus more deeply on specific interests,” said Nickel.

“I grew up with the incentive to act, to do things, and to use what I learn in the classroom to have an impact on the world,” said Merino. “When I turn on the TV and see news about climate change or public policy, I don’t want to feel like I can’t do anything just because I’m a student. HIP encourages people to implement their ideas and not just stand on the sidelines.”

Having attended the Spark Innovation Conference at Yale last year through the HIP student group, Merino was inspired to lead this year’s members to the Igniting Innovation Summit at Harvard. The summit was held October 21, and was centered around the themes of problem-solving and social entrepreneurship. A variety of speakers, including Tyler Gage, the co-founder of the energy drink Runa, and Shama Amalean, the COO of Thinx, discussed topics ranging from technology to intersectional feminism.

“Tyler Gage spoke to us about how he spent two years in the Amazon rainforest, just asking questions and doing research about a leaf that he was going to use to make his drink,” said Noorie Chowdhury ’21, who attended as part of the Haverford delegation. “It was so surreal to share such a close space with him at the conference, with less than 100 other people. He even gave us his email address in case we ever needed his guidance!”

The purpose of the trip to the Igniting Innovation Summit was to open students’ eyes to the ideas being circulated and implemented outside of Haverford’s campus. “Sometimes it’s easy to think of Haverford as closed-off bubble that’s not influenced by the rest of the world,” said Merino. “HIP opens Haverford up to the world—that’s what the purpose of the trip to Boston was. It was an incredible experience to hear from people who are acting on their ideas.” 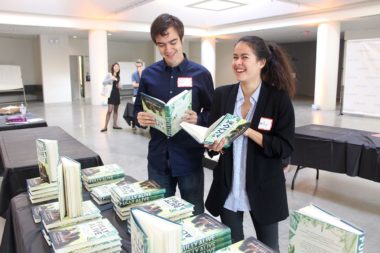 Daniel Bordi ’18 and Maelys Gluck ’18 check out Gage’s book at the conference.