On Oct. 3, various utensils of historic letter writing amassed by scholar and collector William Zachs—and some from Haverford’s own Quaker and Special Collections—were scattered across a table in the Philips Wing of Magill Library. Seated seminar-style, attendees were encouraged to sit close together in order to handle these “curiosities from the world of writing.”

These letters and letter-writing tools were part of “’Yours Truly’: The History and Art of Letter-Writing Before, During, and After the Digital Age,” the first in this year’s Texts and Technology Lecture Series, put on by Haverford College Libraries. The different artifacts helped Zachs, an honorary fellow in the School of Literature, Languages and Cultures at the University of Edinburgh, facilitate a discussion around the future of letter-writing in our modern world.

The historic writing materials ranged from the peculiar—a wax jack and nibber—to the familiar, such as ink, quills, and paper. And after handling the rarities, viewers were invited to examine the letters themselves, including personal postcards Zachs sent to his parents while at summer camp and textbooks comprised of standardized letter responses.

“Writing a letter takes someone into your heart,” Zachs said as he passed around archaic love letters that attendees were encouraged to read aloud. (Continued after the gallery.) 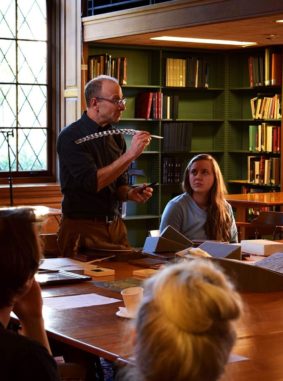 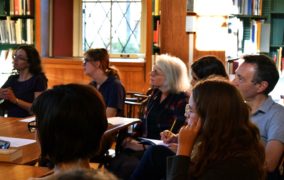 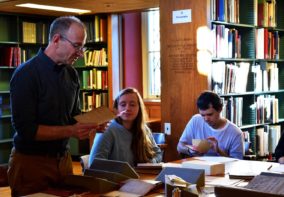 Scholar and collector William Zachs reads from a letter during his lecture. Photo by Sarah Jennings ’21 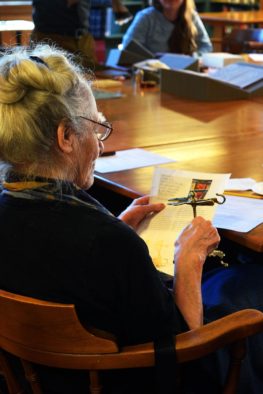 An attendee gets an up-close-and-personal look at some of the artifacts. Photo by Sarah Jennings ’21 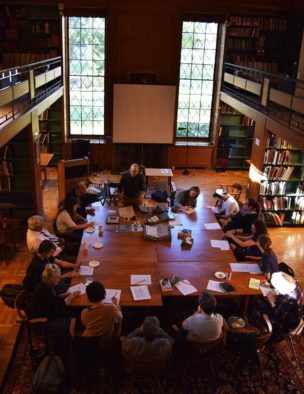 William Zachs’ “Yours Truly” lecture was held around a seminar-style table in the Philips Wing of Magill Library. Photo by Sarah Jennings ’21

Though not specifically “discounting the worth of email,” Zachs pressed those around the table  for their thoughts on the future longevity of more personal forms of communication: notes between pen pals, hand-written invitations, and love letters.

The Texts and Technology Lecture Series, which the libraries first launched in 2014, is a biannual series that invites authors, scholars, and publishers who interact with issues of text, distribution, and digital change to campus for a public lecture and workshop with students.

“The Texts and Technology series is designed to bring to campus scholars who explore texts, technologies of knowledge production, and the links between the two,” said Sarah Horowitz, head of Quaker & Special Collections.