Amy Zamora ’18 ends her presentation with a PowerPoint page of acknowledgments and a smile, prompting a wave of applause from the audience. But the rest of her lecture wasn’t quite so lighthearted: she spoke about her summer work determining the infectious agent in a rare line of cancer cells, research that has implications for the treatment of cancer as a whole.

High-level scientific research such as hers was showcased on Sept. 23, at the 13th Annual Undergraduate Science Research Symposium, the latest installment in an ongoing collaborative effort between Haverford and other local colleges. While originally intended as an opportunity for science students to discuss their summer research initiatives with each other in Haverford’s Koshland Integrated Natural Sciences Center (KINSC), it has expanded to include an audience diverse in terms of both academic interests and educational experiences. It’s not an uncommon sight to see humanities majors mingling with natural sciences professors, or graduate students deep in discussion with college sophomores.

This year alone, over six different institutions—Amherst, Bryn Mawr, Swarthmore, LaSalle, Ursinus, and Haverford—were represented, and the research presented had been conducted at institutions across the globe.

This diversity extends to the subject matter on show, too. At this year’s symposium, students had studied everything from the biomechanics of peafowl crests to the presence of cold molecular gas in starburst galaxies to the velocity and temperature of hydrogen reionization fronts. Even a cursory glance at the itinerary makes the astonishing range of their scientific focus evident: papers with titles like “The Role of klf9 in Glucocorticoid Signaling” exist side-by-side with ones concerned with “Flock Dynamics and Drone Usage.”

With titles like these, it’s easy to be intimidated, to question how experiments described in such dauntingly technical language could possibly have applications for the real world. But don’t be fooled: the results of these student research initiatives provide palpable insight into problems that will likely affect all of us directly or indirectly at some point in our lives—neurodegenerative diseases, mass pollution, and, as previously mentioned, cancer.

Ruiyi Yuan ’19 and Elly Overton ’19, who did extensive work with sea-dwelling microorganisms over the summer, say of their ultimate goal: “The main question of our experiment was whether we [could] find a chemical in the marine environment that could be used to treat… Parkinson’s and Huntington’s [diseases].” Alexandra Morrison ’18 alluded to the role of science in environmental stewardship when she discussed her work, saying that while her research into new methodologies of oil detection in beach sand has “nothing to do with physically getting rid of the oil present in [an] environment… it theoretically could be used to connect oil present in the environment to a specific industrial oil spill.” Zamora’s work, meanwhile, could be used to improve treatment initiatives for rare cancers, many of which are still poorly understood by the medical community at this point in time.

For many of the students, their interest in their chosen subject wasn’t just a passing fascination: they had made the decision to continue their research into the school year, balancing coursework and extracurricular activities with hours in the lab. Why? The answer, in many cases, is simple.

“I truly am interested in the work I am doing and I really love it,” said Overton, who will continue working with her partner Ruiyi on their ocean microorganism research this year. “I want to get a Ph.D. in marine drug discovery for a wide array of diseases.”

Ultimately, though, while the symposium may have expanded in size and ambition over the years, its core purpose remains the same more than a decade on: to “ get students talking to one another about what they are doing,” in the words of KINSC Associate Director Marielle Eaton, who has played a key role in organizing the last four events. With 95 posters presented over two sessions—the most in the history of the event—four student talks given, and hundreds of attendees, she should be proud: this year’s symposium definitely achieved its aim. 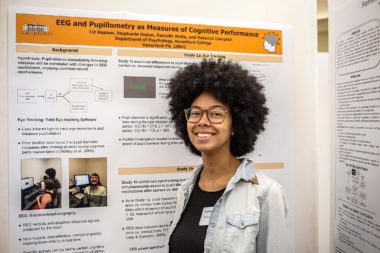 Hongyou Lin ’20 presented a poster on his physics research. 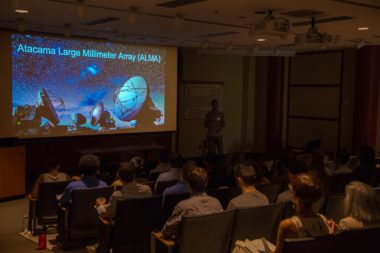 Michael Bueno ’18 was one of the students chosen to give a short talk on his research. 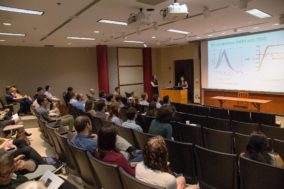 Several students were chosen to give lectures on their work. 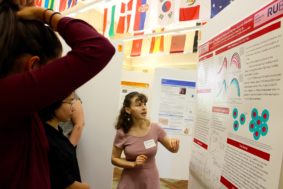 Emma Bullock ’19 shares her research in a poster session. 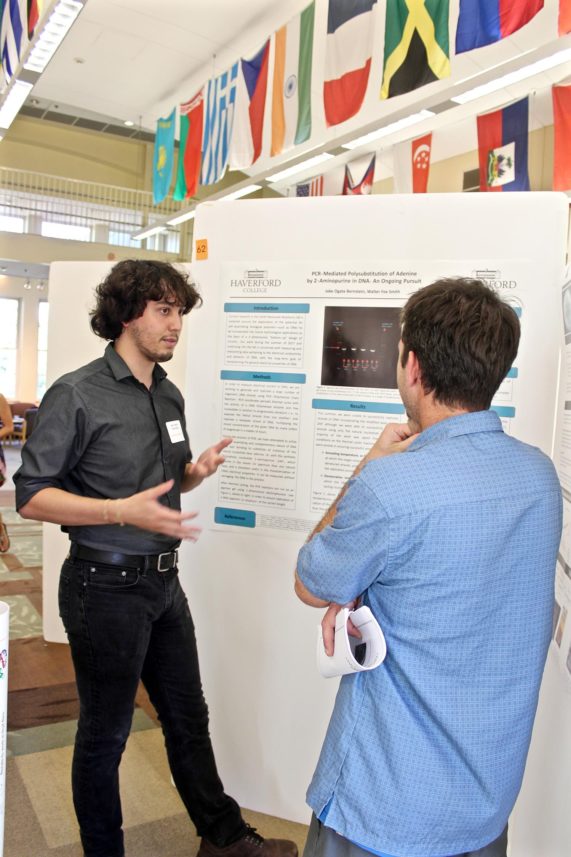