Students, faculty, and friends from the community gathered in the Sharpless Gallery of Magill Library for an opening reception and curator talk for Deprived of the Use of Their Reason: Quakerism & the Curability of Mental Illness at Friends’ Asylum on Sept. 6. The exhibit, which represents the culmination of a summer internship funded by the Scattergood Foundation, was curated by Madison Arnold-Scerbo ’18 and James Truitt ’17. It collects papers—from staff record books to letters—from Friends’ Asylum in Philadelphia, the first private mental hospital in the U.S., circa 1817–1867 to understand the historical perspective of mental illness treatment of that era.

Friends’ Asylum was founded in 1813 by Quakers as the “Asylum for the Relief of Persons Deprived of The Use of Their Reason” with the promise to cure insanity. This new library exhibit explores the records from the first 50 years of its operation. (Now named Friends Hospital, this National Historic Landmark is still treating patients today.)

For Arnold-Scerbo, a history major and museum studies minor, the most interesting thing she learned from her research was how the hospital’s Quaker roots manifested in its medical practices.

“The ways of conceptualizing insanity in the 19th century are a lot different from today,” she said, “and there are similarities as well. The Quaker values of the Friends Asylum made it a very unique institution. We were very deliberate about not making value judgments like that. We sought to describe the ways that the Quaker roots impacted life at the asylum—through the employment of moral treatment, familial values, discipline and restraint, etc.—but we didn’t want to suggest that they treated patients better or worse than other institutions.”

Truitt returned to campus to give this talk after spending the summer after his Haverford graduation working as a special collection intern at the Smithsonian’s Natural History Museum in Washington, D.C.

“All of the incredibly strange-seeming things that [the staff] did made sense to them,” says Truitt, a double major in history and linguistics, of the hospital’s historical therapies. “For example, the circular railroad is my favorite part. There was this idea that the patients needed exercise, so the asylum built a small railroad on which they could propel themselves in circles. It’s an interesting solution.” (Continued after the gallery.) 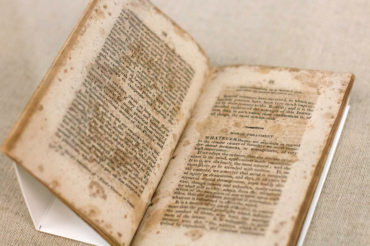 Madison Arnold-Scerbo ’18 talks about her research into Friends’ Asylum 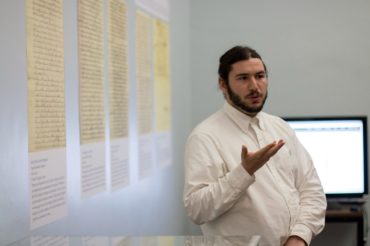 James Truitt ’17 talks about his research into Friends’ Asylum 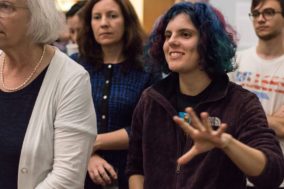 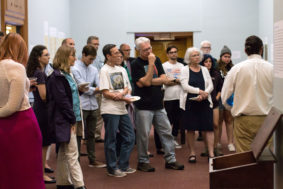 Visitors at the opening talk for the library exhibit

Research on the hospital’s archives—some of which have been a part of Haverford’s Quaker and Special collections since the 1970s—began in the summer of 2015 when the Thomas Scattergood Behavioral Health Foundation, a Quaker-based, philanthropic organization entrusted the College with the original documents it still had and a $40,000 grant to fund archival preservation, student researchers, and the establishment of an online web portal for the materials. Associate Professor of History Darin Hayton has used many of the primary source documents in his class, “Madness,” and different groups of students have worked on the archives in the library for the last three summers.

“This exhibit is the culmination of this project.” said Arnold-Scerbo, “James and I spent the entire summer of 2016 working on this project. The next school year we worked on it a bit more and this past summer there was another group of students working on [it]. It’s been a three-summers-long project, and James and I worked on it primarily in the middle of those three summers.”

The records have also been used for the Digital Scholarship Fellowship, a program run every year by the library which introduces students to different technology that can be applied to scholarly research. Together the students collaborate and build a project together over the year.

“This research project taught me more about [how to research] history and gave me more exposure to later history,” said Truitt. “My thesis was on the Middle Ages, so this helped me broaden my horizons in terms of history of science.”

“We trust our audience to interrogate the texts and look at them in a historical context,” says Arnold-Scerbo. “James and I are both historians of science, and it can be a little bit tricky when you’re looking at things like bleeding, bloodletting, opium—things that we don’t see as effective treatments today. [The challenge is to] instead think about why this institution was created, who went there, what their stories were. [We are interested in] uplifting the voices of the people who were patients, instead of just looking at the institutional records.”

When people walk through the exhibit they see record books on display in glass cases, enlarged photos of certain important pages and items, and the curators’ analysis as a way to guide them through it all. Arnold-Scerbo’s favorite exhibited item is a letter.

The archival work, however, is not finished: the summer internship and document study will continue. You can visit Arnold-Scerbo and Truitt’s exhibit through October 15, in Sharpless Gallery.