The sixth annual Tri-Co Film Festival once again packed the Bryn Mawr Film Institute with students and community members who came to see student work on the big screen. After receiving over 50 submissions from students at Haverford, Bryn Mawr, and Swarthmore, the festival featured 17 films in the nearly two hour event.

This year’s fest offered students with varying levels of filmmaking experience the chance to showcase their work and receive feedback from this year’s jurors Sally Berger and Stephen Winter. Berger, a former curator at MoMA, and Winter, a world-renowned filmmaker whose film Jason and Shirley was part of this year’s STRANGE TRUTH film series, gave out six awards. Of the eight screened films by Haverford students, four received awards. PUERTO RICO == COLONY by Connor Cassidy ’17 earned the prize for creative nonfiction, Sousedi by Holden Blanco ’17 brought home the award for narrative, and ACE by Saket Sekhsaria’s ‘20 received an honorable mention. After an in-person vote at the event, Hardwork Movement – On the Rise by  Forrest Reid ’18 earned the audience award.

Winners received prizes that included hard drives, tickets to the Bryn Mawr Film Institute, and memberships to the Scribe Video Center and International House Philadelphia. Regardless of who came home with awards, though, all artists were glad to have such a unique showcase for their work.

“The Tri-Co film festival is an amazing opportunity to have your work shown to the wider community,” said Cole Sansom ’19, who screened his Vector & Me, an investigative documentary into a strange company that had been posting advertisements around Haverford’s campus, at this year’s event. “Scientists have poster symposiums, musicians have concerts, and filmmakers have the Tri-Co Film Festival.”

Other Haverford works in the lineup were Cuckoo by Katie Rodgers ’18, Welcome to The Stand by Caleb Eckert ’17, and  S-Chords: An A Capella Documentary, a second submission by Holden Blanco.

Many of the student works emerged from a burgeoning film and media curriculum on campus led by HCAH Visual Media Scholars and Visiting Assistant Professors in the Independent College Programs Vicky Funari and John Muse. Sansom, for instance, produced his film in Funari’s “Advanced Documentary Production” class. He and Blanco, who was working on his S-Chords documentary in that class, provided feedback for one another throughout the semester. The festival brought such dialogue outside the classroom and beyond campus borders.

“Many video and film projects that students labor over don’t have many screening venues beyond the classroom, so it’s also good that people can gather to talk about each other’s work,” said Eckert, who screened at the fest for the second time this year. (He had previously entered a film as a first-year in 2014.) “I think the festival also could enable further interactions between the Tri-Co and the Philly media-making world, where there is much potential for fruitful collaboration.”

Harlow Figa ’16, who co-directed the festival this year alongside fellow Hurford Center Emerging Artist in Residence Sarah Moses ’16, is excited to see it continue to prosper, especially with new resources available at Haverford with the upcoming opening of the Visual Culture, Arts, and Media  (VCAM) facility in the fall and the addition of a Visual Studies minor.

“I imagine the festival will see an increase in number and quality submissions,” said Figa. “I hope that students from all three schools will take advantage of Haverford’s VCAM, and that it will become a hub for more Tri-Co collaboration.” 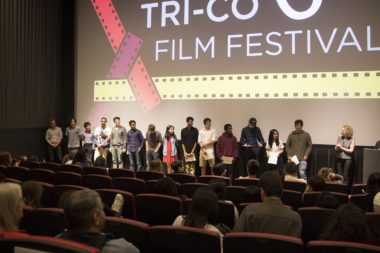 Emerging Artists in Residence and Festival Directors (From left) Sarah Moses and Harlow Figa (both Class of 2016) introducing the films. 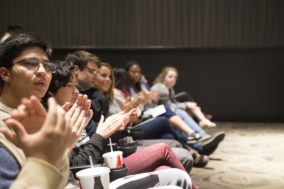 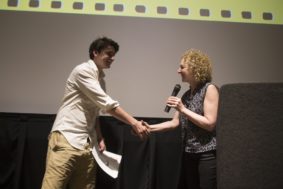