Late into a weekend night, those passing by the front of Founders Hall stumbled across a seemingly misplaced item in front of the building’s steps: a made bed, complete with linens and a pillow. Inside Founders Great Hall, which has historically served as a dining room or a social venue, it also looked like a bedroom, with sixteen beds strewn across the distinctive black-and-white tile floor. Echoing through the large, open room was the sound of overlapping voices, made incoherent by their simultaneity.

Such was the scene at DEARBED, an artistic installation/performance piece engineered by Haverford’s Yoshifumi Nomura ’18. The event opened at 8 p.m. on a Friday night and continued until 11:59 p.m. on Saturday, welcoming audience members to enter and leave at their leisure and stay as long as they felt so moved.

Featuring recorded monologues playing from small devices hidden inside the beds’ pillows, the installation sought to capture the complexity of students’ daily lives through the object of the college bed. With his independent project, Nomura, who recorded monologues from students throughout the Tri-Co, wanted to bring the individual authenticity of a person’s bed into a performance setting.

“People are really doing performance every day, when we go out. But when people are in the bed alone, it’s really truthful,” he said. “Some[one] wrote [her monologue] in Chinese, because that’s how she feels really comfortable talking about her life.”

Nomura, who is majoring in theater at Swarthmore, did not always consider himself an artist. Going to museums, he felt distanced from what he considered “high art.” In fact, it was only two years ago that he realized—thanks to some words from Lady Gaga—art’s power to influence and help people come to terms with trauma. After assessing the different artforms available to practice throughout the Tri-Co, he decided that theater would best suit him.

“The truth is, art is not that kind of high art,” said Nomura, who hails from Tokyo, Japan. “It’s really everyday life, and how you can frame everyday life. Then I realized that, and I realized I want to do art.” (Continued below the gallery.) 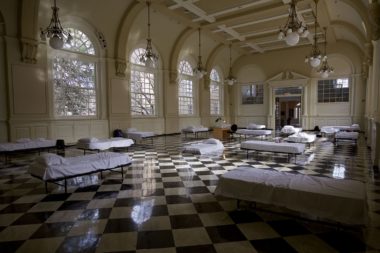 A participant listens to a recorded monologue playing in a pillow.

Theodora Rodine ’19 listens to a monologue on a bed.

Kevin Jin ’17 reads monologues as part of the DEARBED project. 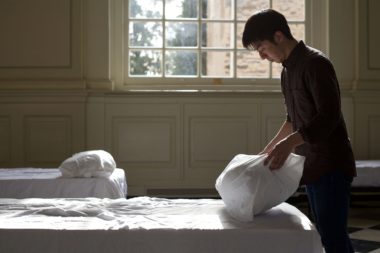 DEARBED creator Yoshi Nomura ’18 returns a pillow to a bed. Nomura was constantly switching out the drained batteries of speakers in the pillows throughout the 27-hour piece.

DEARBED’s monologues elucidate aspects of students’ lives that Nomura feels are usually invisible or covert. As his ideas for the project progressed, he continually grappled with how he could present these stories in an “in your face” kind of way.

“We kind of have to disturb people, because that’s what really happening,” he said

As the project wore on, Nomura struggled with how he wanted to present these ideas in an engaging way. When he wrote his proposal for funding from the John B. Hurford ’60 Center for Arts and Humanities and the E. Clyde Lutton 1966 Memorial Fund (which he later received), he envisioned a complex multimedia performance on Founders Green. He then decided to scale it down and, at one point, even considered living in the Great Hall for a couple of hours while writing a monologue on the floor. Essential to his considerations throughout the process was a goal of making the audience interact with his display. In the end, this was achieved by encouraging visitors to climb into the beds to hear the recorded monologues.

“There’s some really performative things going on in the space,” said Nomura, “If you take a step back and look at the audience, it’s really performing. It’s almost like an ensemble piece… because some people are not speaking, some people just stay there and lay down and think about their life, and just listen to the echoey sound.”

By asking them to perform, DEARBED’s audience members— some emerging from late-night studies and others who stepped inside between parties or from their own beds—question ways they perform every day.

Photos and video by Caleb Eckert ’17