Last weekend Greasepaint, the Bi-Co’s student-run musical theater company, presented Ghost Quartet, an intimate musical by Dave Malloy, creator of current Broadway “popera” hit Natasha, Pierre & The Great Comet of 1812. And if opening night wasn’t nerve wracking enough, Malloy himself was in the audience in the DC’s Black Box Theater, along with the three other actors who originated the parts in the professional production.

“Performing for the original cast was a magical experience,” said student director and actor Hannah Weissmann. “They had never seen the show before, so it was exciting for everyone involved. They were so supportive and enthusiastic about our version of the show, and we were really excited to share it with the people whose songs we had been listening to since December.”

Every year Greasepaint mounts two or three musicals, ranging in genre and style, and creates many other arts-related opportunities for the student body on campus. The group’s past productions have included comedies such as Avenue Q, dramas like The Last Five Years, and rock musicals like Spring Awakening. Ghost Quartet—selected, directed, and performed by students—was its most recent production, and in addition to Malloy’s presence, the house was full four evenings in a row in Haverford’s Black Box Theatre. (Continued below the gallery.) 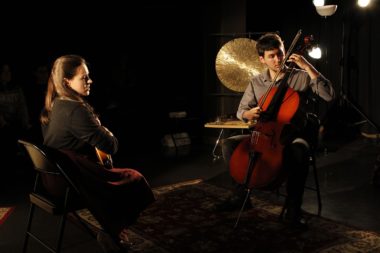 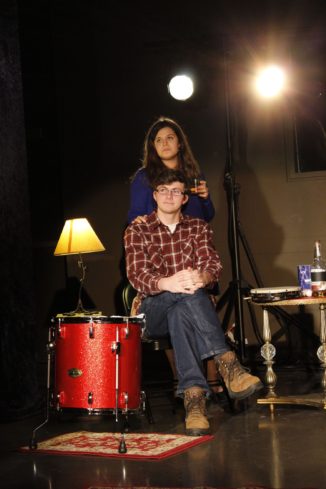 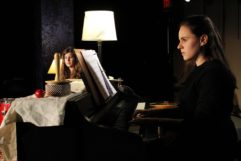 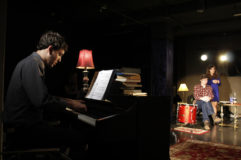 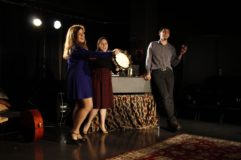 The show, which touches on themes of love, separation, and death, is a song cycle about four friends who meet in the afterlife and share interlocking stories about past lifetimes. The non-linear plot presents five overlapping stories, all of which are enacted by the four friends. Much of the storytelling is done through song: the small cast sings and plays various musical instruments—including the cello, violin, keyboard, and guitar.

“The whole quartet had to learn new skills for this show and we pushed ourselves and each other to become better performers and musicians,” said Weissmann. “For some it was learning new instruments, or playing particularly challenging passages; for others, it was figuring out the more experimental vocal sections and the tricky harmonies.”

The student actors expertly met those challenges, captivating the audience with their (musical and non-musical) performances, and even involving audience members by handing them musical instruments and drinks and inviting them to dance throughout. Ghost Quartet perfectly captured the talent, dedication, and enthusiasm that the members of Greasepaint cultivate for on-campus theatre.