No, that wasn’t a drunken insult hurled across a bar. It came from the keyboard of Pennsylvania Democratic State Senator Daylin Leach, who represents the state’s 17th district (which includes Haverford College). And thanks to that February 7 tweet, the local representative earned some widespread viral popularity. Since well before then, however, he’s been a staunch progressive voice in Pennsylvania’s General Assembly, serving in the State Senate since 2009 following a five-year term in its House of Representatives. In addition to his local lawmaking, he has also recently worked alongside national resistance efforts to the Trump administration.

Last Wednesday, Leach took a break from such advocacy work to engage in an age-old political practice: meeting with his constituents. Haverford’s newly renovated Dining Center basement became the site of a jam-packed Q&A session between Leach and Haverford students and faculty. On the invitation of Rachael Garnick ’17, who met Leach at a Hillary Clinton campaign event in Havertown last year, the vocal senator visited campus to discuss the best ways to effect change—both inside the system, and out.

“I was just really pissed,” said Leach of his infamous tweet. “Here was the president of the United States threatening to destroy the career of a state senator like me for introducing the same bill that I’ve introduced. … He’s a bully, he tries to intimidate and threaten and belittle and delegitimize everything that stands in the way of his power. And I was just sick of it.” (Continued after the gallery.) 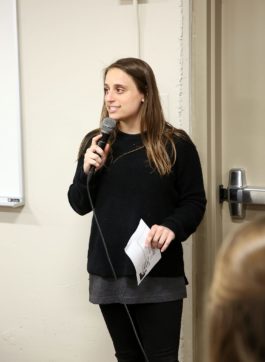 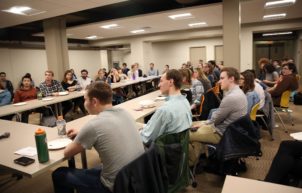 There was a packed house for Leach’s constituent visit. 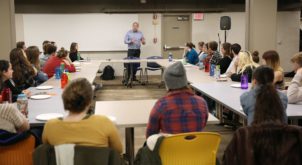 Pennsylvania State Senator Daylin Leach speaks to Haverford students in the basement of the Dining Center. 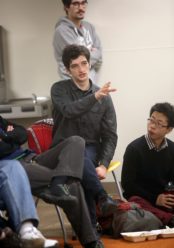 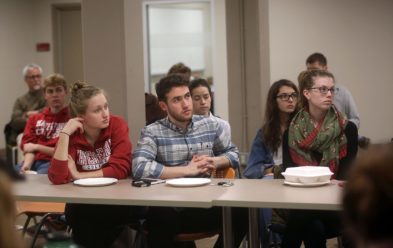 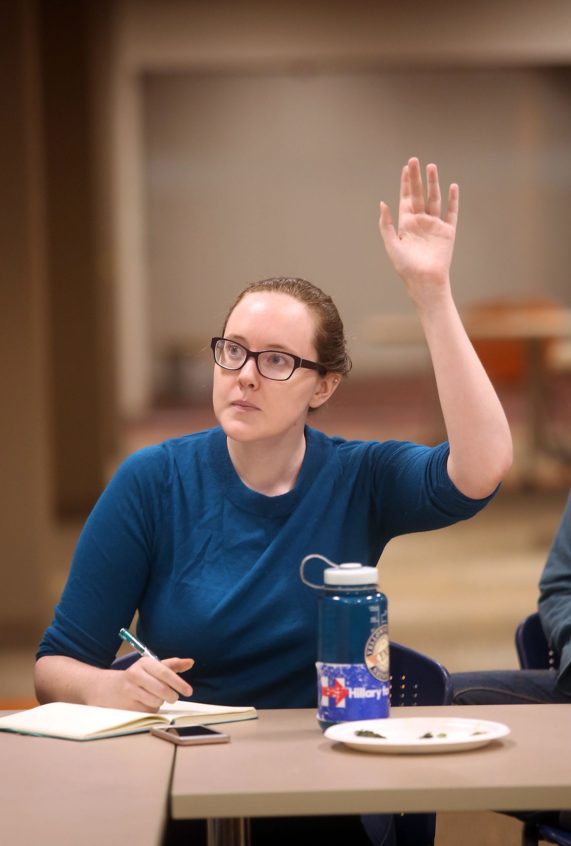 Senior Hannah Cregan Zigler rasies her hand to ask a question during the Q&A.

It was the best Leach could do to express himself in 140 characters. And it’s certainly won him recognition: as of February 23, he boasts more than 40,000 Twitter followers. (Pa. Senate Majority Leader Jake Corman, by comparison, has only about 4,000.) Leach was able to catch the attention of people all over the country with just one tweet, and on Wednesday night, with no character limit and a very receptive audience, he was able to speak honestly and extensively about his views on political resistance.

“I think that we need blunt talk in this time,” he said. “We cannot sugarcoat things. … There are differences between Donald Trump and Jeb Bush, for example. … [Trump] is someone who not only didn’t recognize the legitimacy of our systems of checks and balances, he [is] unaware of it. … He didn’t know courts could tell him that he couldn’t do something.”

Leach repeatedly stressed the need for urgency and coalition building, arguing against the incessant need for “purity” among the left. Because Trump is by no means a normal threat, he reasoned, the need for resistance (whether on Twitter or at town hall meetings with representatives) is more dire than ever.

Leach engaged with the dozen or so students who prepared questions, answering concerns about Democratic leadership, the role of state and local politics, and political polarization. While he had a lot to say, he candidly admitted, “I don’t have all the answers tonight.”

Leach’s Haverford constituents seemed eager to hear his message, which, though complex and multifaceted, also included one absolute recommendation: “Go out there and change the world.”