Last week Magill Library’s Sharpless Gallery, for its second consecutive exhibit, unveiled a student-curated show. Sophie McGlynn ’18, a political science major and peace, justice, and human rights concentrator, welcomed students, faculty, and staff into the gallery to enjoy her Waging Peace: 100 Years of Quakers, Moral Quandaries, and a Quest for Justice—an exhibit of the American Friends Service Committee, which delves into the work of the Quaker pacifist organization and celebrates a century of its existence.

The AFSC, as part of its centennial celebration, has been staging a traveling exhibition featuring printed banners that detail their current and former work. The exhibition and its banners are now making a stop at Haverford, colliding with the College’s extensive historical material available in Quaker & Special Collections, which sits right next door to the gallery. McGlynn’s primary job as curator was to make sense of all of this material, which includes personal letters, meeting minutes, and photographs, and put it in conversation with the AFSC exhibition materials.

“From our side, what we’re bringing is a lot of personal documents from the collections we have,” said McGlynn. “Because a lot of people who were sort of important employees at the AFSC also went to Haverford, or taught here, or have some connection to the college as Quakers, those collections have been donated to us over time. We’re bringing a more personal and also a more historical perspective to what the AFSC has.”

The walls of the rectangular gallery are adorned with an even mix of AFSC banners, which are more modern, glossy presentations of the organizational history, and glass cases filled with much older-looking, typewriter-produced letters, telegraphs, and print material. “It’s interesting aesthetically,” commented McGlynn.

It’s also interesting, and unique, historically, according to Mary Crauderueff, curator of Quaker Collections. A little known fact about the AFSC, which she hopes this exhibit spotlights, is that it was founded at Haverford in 1917, and has extensive legacy with the College and its principles.

“There’s an integral history between AFSC and Haverford,” said Crauderueff. “For me… it was really important that we do something to celebrate the centennial with AFSC, and to do that here. … Over time, we haven’t had as much of a direct connection with them here, but we really have this great historical connection that is invaluable to what AFSC still does today.”

Special Collections workers and McGlynn pieced together this storied partnership, in part, in the hopes of inspiring current Haverford community members to carry on the peacemaking work of the AFSC.

“I think what we want people to take away from it is that this is an organization that embodies a lot of Haverford’s principles and peacework that we try to instill in a lot of students,” explained McGlynn, “and that that kind of work is not just in the past… but that it’s ongoing and that it’s something that people today can still be a part of.”

The exhibition is on display in Sharpless Gallery through March 12. 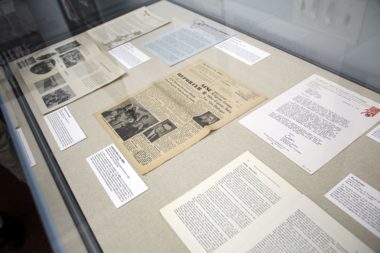 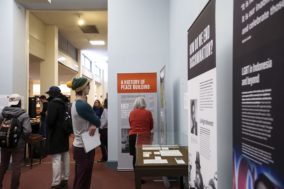 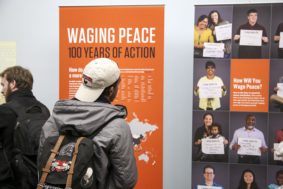