On Friday evening, Sharpless Hall was officially reopened with a ribbon-cutting ceremony in Zubrow Commons. Faculty, students, staff, the project’s architects, and members of the College’s Board of Managers all came together to celebrate the newly renovated home of the psychology and biology departments, which had been under construction since last spring.

In a speech given before the ceremonial ribbon-cutting, President Kim Benston warmly thanked everyone who contributed to the challenging process of the renovation that successfully transformed Sharpless into a more resourceful, welcoming, and up-to-date building. Benston called the completion of the Sharpless project an “extraordinary, auspicious and happy moment,” and expressed excitement about the opportunities for scientific collaboration and interactions the new environment will foster. “The building’s renovation heightens the potential of the psychology and biology departments, their interdisciplinary intersection and what they can offer students,” he said.

Benston also thanked the Board of Managers, whom he said had a strong vision for the future of the building, and the generous alumni whose donations made the realization of such a vision possible. Several of these alumni were present at the ribbon-cutting event, including brothers Jonathan (’60) and George (’61) Rhoads, who majored in physics and chemistry respectively, and who remember spending much of their time at Haverford in Sharpless. “I remember taking a test on the Krebs cycle in Sharpless and thinking I had failed,” said George. “I wasn’t specifically interested in renovating Sharpless, but I wanted to give back to Haverford. It’s exciting to help bring Sharpless laboratories up to standard.” (Two other major contributors to the project, Darwin J. Prockop ’51 and Carl Grunfeld ’68, were unable to attend the ceremony.)

This renovation, said Benston, marks both the ending of the Koshland Integrated Natural Sciences Center project that began 15 years ago, as well as the beginning of a new transformation of Haverford’s core academic buildings—the old gym and Magill Library will soon follow in this wave of reconstruction. “Sharpless’ restoration has set the tone for future renovation projects,” he said. 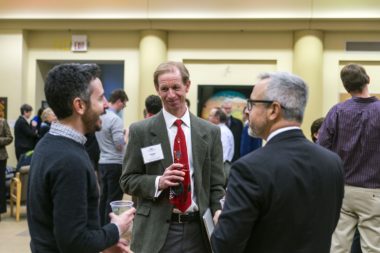 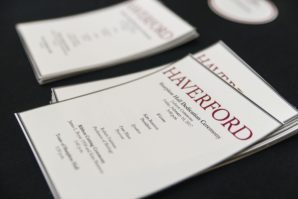 Provost and Associate Professor of Chemistry Frances Blase also spoke at the ceremony, expressing her admiration for the space as both a physical building, boasting its beautiful architecture, and as a state-of-the-art teaching space. “Sharpless is home to two departments with faculty who are outstanding scholars and teachers,” said Blase. “The renovations will further enrich academic and research programs.” Blase observed that Sharpless is not only home to the psychology and biology departments, but that it hosts classes taught by computer scientists, physicists, anthropologists, economists, and more. “It is a hub of ideas, intellect and creativity,” she said. “The faculty-student interactions, guidance and mentoring that take place in Sharpless have always, and will always, make it a special place, and will have a profound influence on future generations of students and the faculty and staff they encounter here.”

In his remarks, Professor of Biology Rob Fairman praised the cooperative, tight-knit relationship between the renovation’s architecture firm, EYP, and construction firm, Cascades. “The new infrastructure creates a warm, inclusive environment,” he said. “The functionality and aesthetics are transformative—the architects’ imagination and creativity pushed against the inclination of Quaker austerity.”

Though Sharpless Hall officially welcomed its first office denizens and classes last month at the start of the semester, Friday’s event was a celebration of the space for the whole community. Following speeches by Benston, Blase, and Fairman, the president joined Dr. James L. Boyer ’58, the Ensign Professor of Medicine at Yale and a major donor to the project, to cut the ceremonial ribbon on the building. Then attendees were invited on guided tours of the new laboratories.