Millions around the world celebrated Chinese New Year on Jan. 28 (the celebration always occurs on the first new moon between Jan. 21 and Feb. 20), and here at Haverford, the campus got in on the Year of the Rooster fun too. The campus chapter of China Global Connection held two events on Friday, Jan. 27 to mark the occasion: a traditional 10-course Chinese dinner and a watching party for the annual Chinese New Year Gala from CCTV (China Central Television).

President Kim Benston joined roughly 40 Fords in Founders Great Hall for the family-style dinner, which was catered by Margaret Kuo’s and featured special items, such as “eight treasure sweet rice” for dessert, that are only served at New Year.

Even more people joined for the party after the dinner, which featured dumpling-making, calligraphy practice, and poetry writing, as well as screening the gala from China.

Fireworks are an important Chinese New Year tradition that the students were unable to partake of (due to safety concerns), but they were able to light sparklers outside, which helped everyone get in the festive mood.

Rae Yuan ’19 said they were her favorite part of the evening. “Although we were all missing the noise and fun of fireworks and the sparklers were really nothing compared what we have in China, at least it smelled like a New Year celebration at home with the smoke of the sparklers. ” 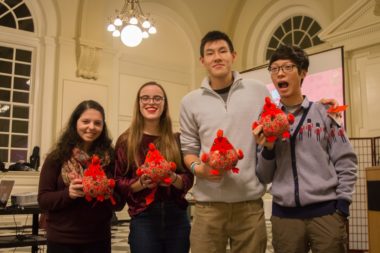 A red packet and gift were given to everyone who attended.

Toasting the New Year with the president. 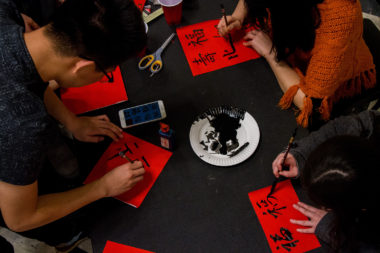 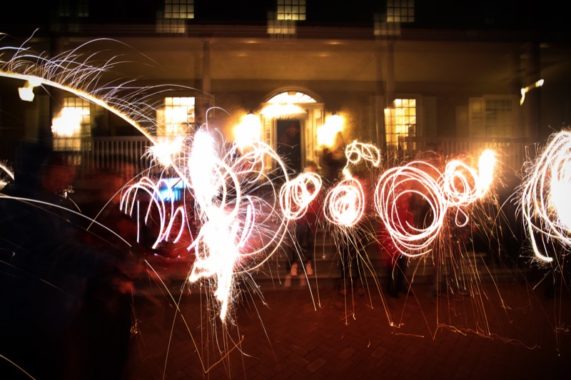 No fireworks, alas, were allowed, but students celebrated the coming new year with sparklers. Photo by Rae Yuan ’19.