With arms raised and voice escalating, Amanda Kemp projected soul-moving words alongside the percussive violin of her husband Michael T. Jamanis. As part of their Tuesday night event, “Say the Wrong Thing,” which featured readings from Kemp’s new book by the same name and spoken-word and musical performances, Kemp and Jamanis delivered an interactive healing and learning experience on the stage of Marshall Auditorium.

Sponsored by the Distinguished Visitors Program and the Writing Program, the two performers came to campus as part of a “mission to heal the planet.” Kemp, who is no stranger to Haverford after being last year’s Friend in Residence, is currently touring her performance project “Inspira: The Power of the Spiritual,” and is leading a nationwide Say the Wrong Thing workshop series. Drawing from a variety of these projects, “Say the Wrong Thing” was a crowd-engaging session of introspection and emotionality and even featured a cameo from a cappella group the Outskirts.

“What I’m about is racial justice and authentic community,” said Kemp, prefacing a reading from her book. “I’m about creating systems that are equitable and inclusive because I want us to actually be in community together… but I don’t think we can get to community if we don’t have justice. We can’t get to community if we’re not authentic, and that means we have to take risks with each other.”

It was, therefore, an interactive experience. In between readings and performance pieces, Kemp asked the audience to think, ask questions, and speak with those around them about the words that she shared. Following a slideshow of the faces and names of black women who had been killed at the hands of police accompanied by Jamanis’ soulful violin playing, Kemp gave a reading from her book. In the middle of that reading was a partial performance of “Inspira,” a dynamic duet that featured a choreographed interaction between Jamanis’ violin and Kemp’s words and motion. All of it was framed by the overall concept of “the heart” in Kemp’s book, or as she sees it, the “H.E.A.R.T.”

“For me, the word heart is an acronym,” she explained. “The five strategies of the heart are H, hold space for transformation… E for express yourself, A for acting with intention, R, reflecting on yourself, and T, trusting the process.” The show used music, reading, and talking to align with the five strategies, which Kemp hopes will help bring about her vision of racial justice and authentic community. Her performance demonstrated such a reality could not be attained without art and conversation, which can require saying the wrong thing sometimes. 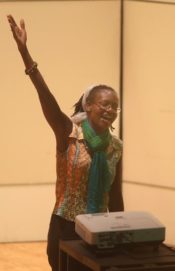 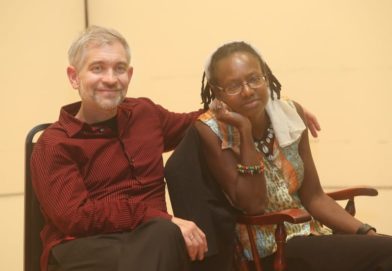 The evening culminated with a question-and-answer session with the performers and audience members, who were seated in chairs on the stage. Following the discussion, the Outskirts stood for their second performance of the night, singing a spiritual called “Hush;” all in attendance were invited to sing along.

“Say the Wrong Thing” was, indeed, a performance. (Kemp, in fact, holds a Ph.D. in performance studies from Northwestern.) But it was also more than that, blurring the lines between performer and spectator. Performance, Kemp explained, has the power to do much more than entertain.

“[I] see art… as medicine,” she read from her book. “These performances provide space for us to feel our anger, grief, despair, and remember our power to do good.”