Oftentimes composers have to wait years (or even a lifetime) to hear acclaimed musicians play their works. That was not the case for students in Professor Ingrid Arauco’s composition course. Arauco’s student composers had the special opportunity last week to hear the music they wrote for class performed onstage by members of the Network for New Music ensemble, a group that The Philadelphia Inquirer has called the city’s “premier new music organization.” The ensemble’s musicians read and performed the work of two of Arauco’s students prior to their own concert, “Flying Solo,” a program of five virtuosic solo pieces, including ones by Haverford Department of Music faculty Arauco and Curt Cacioppo.

Monday’s event wasn’t the ensemble’s first collaboration with Haverford students. The Network’s musicians met with students in Arauco’s class several times this semester already, and the ensemble has participated in such a residency with the Haverford Department of Music since 2006. Each year, students in Music 266 (the composition class) compile portfolios of written work throughout the semester and are regularly able to receive feedback from the Network’s professional musicians, many of whom are also in the Philadelphia Orchestra. At the end of the semester, all students get to see their work read and recorded.

“Hearing music I’ve written performed live is an incredible experience,” said Chloe Lindeman ’17. “Not only is it fun to see how the phrases I’ve imagined come to life, but I always learn something new about the instruments I’m writing for and what they can do. It reminds me that the time and effort I’ve put into the music are worth it.” 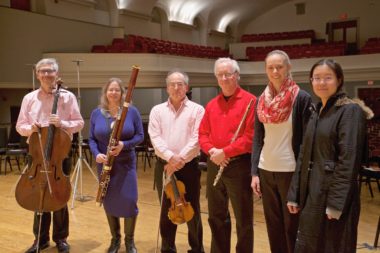 The Network for New Music ensemble. 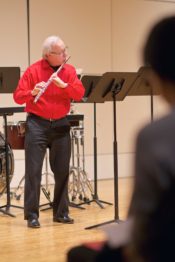 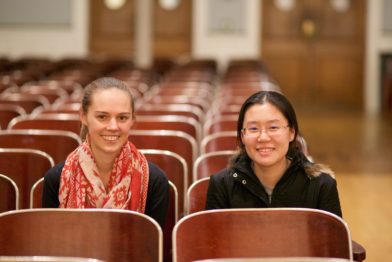 Music 266 requires students to compose five pieces throughout the semester for a variety of instrumental setups. This semester, the students have written a duo for either violin and cello or flute and bassoon, as well as a solo piano piece, a solo flute piece, a piece for percussion, and a piece for flute and piano. While all pieces are read through and performed in some manner, Monday’s event was unique because Marshall Auditorium was open to the public as Lindeman and Maggie Meng BMC ’17 each had two compositions read and performed: a duet and a solo flute piece. Network percussionist Eric Derr already read and performed student percussion pieces, but Monday’s performance was made distinct by the presence of an audience.

“The benefits of having professional readings of student works are tremendous,” said Arauco. “Students can hear their music played in a way that is impossible to achieve using playback on a computer, and often at a technical level that is difficult to imagine… As for presenting student work in a public concert setting, I’d say it gives students a taste of the professional world of a composer… getting your work out beyond a close circle is an important part of a composer’s life.”