During World War I members of the Army’s Medical Corps and other non-combat personnel trained at Haverford, so the campus was a fitting choice for a commemorative tree planted as part of the National WWI Centennial Memorial Tree Project. On Veteran’s Day, Eugene Hough, co-founder of the Uncommon Individual Foundation’s Saving Hallowed Ground Program, came to Haverford at the invitation of the Arboretum Director Bill Astifan to plant a Swamp White Oak on College Lane.

The tree is the second in an ongoing series of plantings by the National WWI Centennial Memorial Tree Project; the first was planted on Sept. 11, 2016, in Wayne. This project was inspired by a century-old program that planted oak trees around the world as memorials commemorating soldiers who died during WWI. (That program began in 1914 and continued into the post war years.) Hough and his colleagues hope these modern-era WWI memorial plantings become living reminders of the those who served in the “Great War” around the world.

Hough’s father, William Hough Jr., attended Haverford and graduated with the Class of 1950. The Swamp White Oak on College Lane was planted in his honor.

After the planting, Hough asked attendees to don white gloves before leading them through a folding ceremony with the 20×30 Saving Hallowed Ground Centennial Flag. 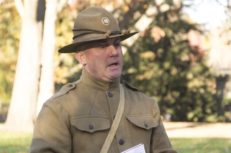 The tree that was planted is a Swamp White Oak 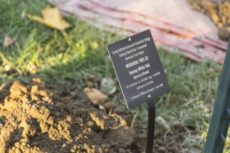 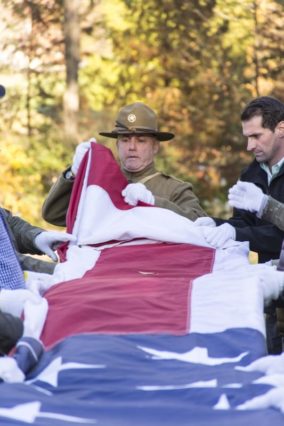 Hough demonstrating the proper way to fold the flag. 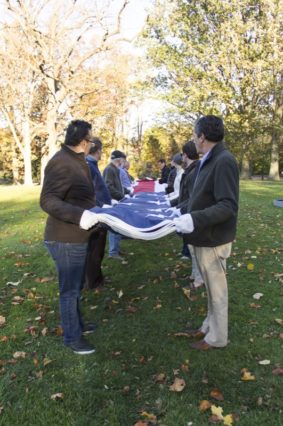 Attendees at the tree planting wore gloves to fold and unfold the 20×30 flag. 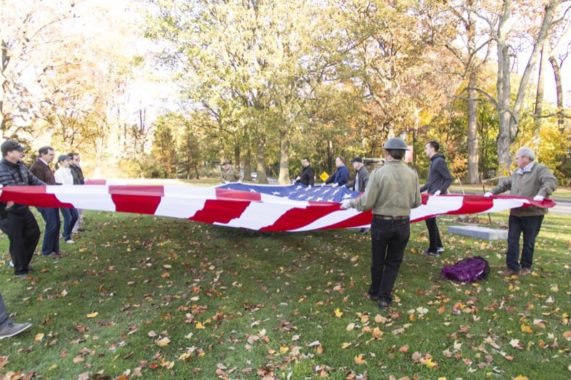