Decades of alumnae from the Oxford Blues, Haverford’s oldest all-women a cappella group, took the stage together last weekend in Founders Hall for a night that bridged the past and present. It was the first time in six years that the group, which was founded in 1985, held an alumnae concert–this one celebrated its 31st anniversary.

Nearly 20 alumnae from as far back as the Class of 1991 were able to participate, including three of last year’s four graduating members. The setlist featured some songs familiar to all performers (“Snap, Crackle, Pop,” which has been performed since the group’s founding), while also including songs that were known only to some. The combined group had to overcome roadblocks in their one-day rehearsal to teach each other the unfamiliar songs, but after hours of work, they were able to perform a diverse array of music that spanned eras and styles. For all involved, it was an opportunity to celebrate their shared history, get to know members from different generations of the group, and demonstrate talent that transcends age and experience.

“I am honestly very surprised how fast it all came together,” said current member Stephany Prodromos ’19. “And we had a lot of fun reminiscing and laughing as we learned. The way we were able to come together like this and learn music so quickly and still have it be an enjoyable experience really proved how special this group of ladies really is.”

The 10-song setlist included Van Morrison’s “Moondance,” Fleet Foxes’ “White Winter Hymnal,” and a Macedonian folk song called “Shto.” After the concert ended, there was a party at which current Blues were able to interact with alumnae in a more casual setting, which allowed for conversations about what alums are up to now and the group’s past. (More after jump.) 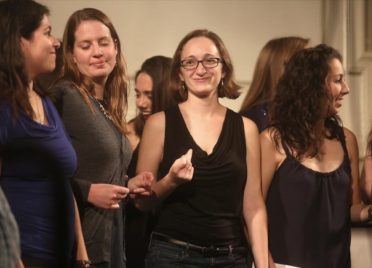 The concert also gave former members a glimpse of the continuing legacy they left behind. Michèle Muñoz-Miller ’97 came from nearby Havertown to rejoin her group.

“To be able to sing with a group of women, some of whom are only a few short years older than my eldest son, is remarkable,” said Muñoz-Miller, who was surprised how quickly she was able to pick up all of the arrangements she hadn’t sung in years. “I learned that there is nothing like the energy that comes from a room full of women singing with open hearts. I suppose I already knew that, but I appreciated the reminder.”

“The purpose of holding this alumnae concert, I believe, is to keep the spirit of this group alive,” said Prodromos, who learned over the weekend that her group’s name came from the mind of a member in the Humtones (Haverford’s first all-male a cappella group, which was also formed in 1985) the night of the Blues’ first concert in 1985.

The a cappella community at Haverford remains strong to this day, with Haverford students singing in eight different groups (including Bi-Co and Tri-Co ones). Concerts, like this one, with alums give singers a chance to engage in that community’s history, uniting group members around traditions of music, family, and fun. After over 30 years, the Oxford Blues plan to keep this tradition going strong.