Over the weekend, on the sports fields on the west side of Haverford’s campus, against a backdrop of picturesque autumnal colors, white plastic discs floated through the air by loofahs, lumberjacks, and bumblebees. The occasion, of course, was Haverween, an annual ultimate Frisbee tournament that draws teams from around the region and from years past to Haverford.

Started in 2002, Haverween is the only tournament co-hosted by both the Bi-Co women’s team, Sneetch Ultimate, and the Haverford men’s team, Big Donkeys Ultimate. (The Donkeys also host a tournament in the Spring called Layout Pigout, which last year rose to national prominence in the Division III scene). Haverween is made special not just by its inclusion of both teams, but also by its tradition of creatively costumed teams, and the fielding of Sneetch and Donkey alumni teams as well.

While this year’s tournament didn’t feature nearly as many alumni as last year’s 30th team anniversary celebration, former ultimate players from across the Tri-Co came out in force to play against their younger counterparts.

This year, as both the men’s and women’s tournament brackets welcomed familiar regional opponents like Dickinson and Philadelphia University, Big Donkey Ultimate and the Sneetches performed well in their respective pools. The Donkeys, who wore Jackson Pollock-inspired paint-splattered white t-shirts as a team costume, won most of their games, but fell to the Donkey alumni, Swarthmore alumni, and Drexel. The Sneetches, whose notable “zombie prom” theme included torn dresses and edible fake blood, split into A and B teams. The A team only lost to the Sneetch alumni, and the B team performed admirably, but failed to bring home a victory. 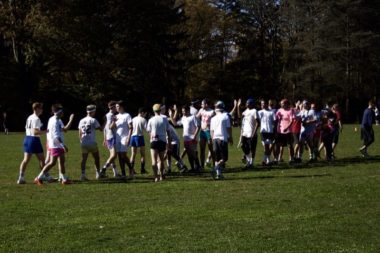 Penn vs. George Washington University (dressed as fruits and vegetables)

The Sneetches (in prom dresses) play the American University team, dressed as bees.

“I love the spirit at Haverween,” said Madison Sultan ’18, captain of the Sneetch B team. “It’s just super open, and a space for growth… I liked having the opportunity to bond with new players.”

While Haverween’s festive fun is good enough reason to attend, there is a special reason while ultimate tournaments are so beloved by the players at Haverford.

“[In ultimate,] players rely on what has been deemed the ‘spirit of the game’ when it comes to playing fairly, policing oneself, and making space to discuss and argue calls made by players in both a constructive and respectful manner,” said Donkey captain TJ von Oehsen ’18. “In this sense, the values that ultimate works so hard to upkeep align exactly with many of the Haverford community at large… In hosting Haverween every year, the ethos of our team and Haverford College at large are put on full display and we are proud to show the ultimate community…what we are all about during the weekend.”

Hosting a tournament is never easy, and much of the work involved comes from members of the teams themselves. Along with help from Director of Student Activities and Leadership Michael Elias and Director of Athletic Facilities Jim Kenyon, both teams’ captains relied on help from all players to set up and clean up fields, prepare food for visiting teams, and manage team equipment. And the teams’ efforts were rewarded by a wonderrful weekend of fun and competitive play.

“In general, I just really appreciated the huge turnout from both veteran and new players,” said von Oehsen. “Some people scored their first goal of their semester-long career, others played some of the best ultimate of their four years on the team. All of it was a lot of fun to be a part of.”