Last week, Consent to be Seen became the newest exhibit displayed in Magill Library’s Sharpless Gallery. It features 13 portraits by artist Riva Lehrer, who focuses on identity in portraiture, often portraying socially stigmatized subjects, and raising questions about how bodies are represented by those who capture them. But unlike the other shows hanging around campus, this one wasn’t the brainchild of a professional curator; it was a two-year labor of love by a student.

Consent to be Seen was curated by senior English major Courtney Carter ’17 with assistance from Writing Center Director Kristen Lindgren. (“Courtney and I worked closely together,” said Lindgren, “but the major curatorial decisions were Courtney’s.”)

Carter first discovered  Lehrer’s work two years ago (as a sophomore) in John Muse’s course “Theory and Practice of Exhibition: Objects, Images, Texts, Events.” At the time, Lehrer was on campus as a Mellon Creative Resident, and Muse, whose class focused on both the theory and ethics of curation, brought his students to one of her lectures. For her final project in that class, Carter wrote a curatorial proposal involving Lehrer’s art, but it was not intended to be anything more than hypothetical. However, after the encouragement of Muse and support from various College organizations, Carter’s concept slowly became a reality.

“I spoke with Riva once over the phone when writing my final project,” said Carter. “At the very end of the phone call she was excited about my proposal and wanted to know if it was actually happening… I was like ‘I don’t know, maybe,’ but I really was just planning on having it be my project, but it ended up working out.”

The process to realize her proposal, Carter explained, was not exactly straightforward. Besides finding a space to display her exhibition (which she had hypothetically staged for the Cantor Fitzgerald Gallery), she needed to create a loan agreement for the various artworks, and find sources of funding. To conquer these and other logistical challenges, she worked with Lindgren, who taught Carter’s course “Critical Disabilities Studies: Theory and Practice” last spring.

“I was eager to help make the project a reality,” said Lindgren. “Last spring Courtney curated an exhibition, entitled Symbiosis, that highlighted the partnership between students in ‘Critical Disability Studies’ and the Center for Creative Works, an artspace for adults with intellectual disabilities. Courtney has been a wonderful collaborator; she brings to exhibition-making a creative vision, an intellectual framework, and an ability to solve problems on the ground.” 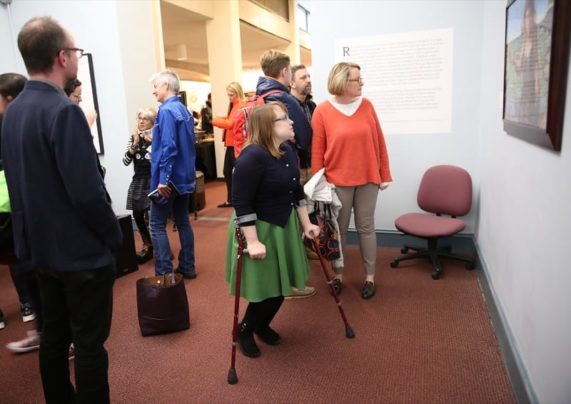 Much of the funding for the project came from The John B. Hurford ‘60 Center for the Arts and Humanities’ Tuttle Creative Programs Fund and the College Libraries, as well as the Distinguished Visitors Fund, which brought Lehrer and disability activist Rosemary Garland-Thomson to campus for a discussion at the exhibit’s opening reception.

“I thought the job of a curator was primarily conceptual,” said Carter. “I would say that was the most important part of what I was doing… especially ethically and specifically because of the nature of Riva’s work… but also the logistics, I spent most of my time doing the logistical stuff.”

Despite the laborious process of realizing an idea that was literally years in the making, Carter believes her work is bringing something important to the Haverford community by presenting Lehrer’s art and the themes it addresses to new audiences.

“I think the thing I’m most excited about is the opportunity for Haverford students, Haverford faculty and staff, and people in the Philadelphia area to have access to such a large grouping of her work,” said Carter. “Obviously this is a really exciting thing for me as an undergraduate student to have the opportunity to do this… As a curator I think my job especially with this show is to really take to heart what Riva’s trying to do as an artist with her subjects and similarly consider the implications of my representation of her work…I think it’s such a cool opportunity for people that might not have ever heard of her before or be involved in the disability community to have the opportunity to see the amazing stuff that she does.”

“Haverford is unusual in the extent to which it supports student initiatives,” said Lindgren. “One of the reasons I love teaching here is the opportunity to partner with students on projects like this one. If a student like Courtney comes up with a good idea, the college—in this instance represented by the Haverford libraries and the HCAH—will find a way to make it happen.

Consent to be Seen is on display through Jan. 27.