On Wednesday October 19, Founders Hall was packed with members of the Haverford community for a talk on ethical engagement in social justice by writer and civil rights activist Shaun King. The senior justice writer for The New York Daily News, King has been featured in The Wall Street Journal and on CNN, MSNBC, The Ellen Degeneres Show, and The Tonight Show for his activism and his use of social media to spread awareness of the Black Lives Matter movement.

His talk began with an introduction by student organizer Maurice Rippel ’19, who read some names of recent African American victims of police brutality including Mike Brown, Eric Garner, Tanisha Anderson , Sandra Blend, Tamir Rice, and Philando Castille. Rippel then dedicated the evening’s event to them, saying, “Tonight is for you all. You are not silenced. You are not gone or forgotten. We remember. Tonight, we are your voice.”

King began his talk by referencing a private workshop he held earlier in the evening with students, staff, and faculty, saying that he was pleased to note that, unlike at some other institutions where he has spoken, “the things that bother or disturb you [students], equally disturb the staff and faculty as well.”

“Woven into the fabric of this institution,” he said, “is compassion.” 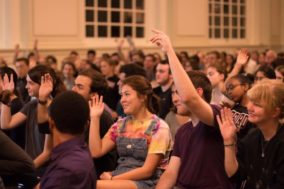 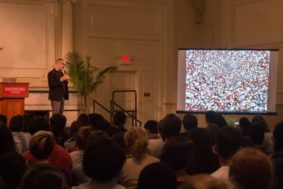 King, who has taught history and civics in schools, prisons, and detention centers, presented his talk as an educational one, noting that “it’s really difficult to discern the moment of time and history that you’re in when you’re living in it.”

In graduate school, King learned about Leopold von Ranke, who pioneered the study of history as a formal discipline. From him, King learned an important lesson about where people stand within history and how “we got to where we are right now.” Von Ranke attempted to outline all of human history, including major figures and events, and found a trend which King used as a crucial framing point of his talk: people tend to believe that humanity is steadily getting better because they think they are better off than people in the past.

“I’m having a hard time accepting that humanity is steadily improving,” King said, arguing that the perceived upwards trend of humanity, often attributed to technological advances, fails to explain historical atrocities like the Holocaust or slavery. He then showed videos of more recent cases of police brutality and racially targeted violence, like the McKinney pool party incident and a Trump rally crowd physically assaulting University of Louisville student Shiya Nwanguma.

Rather than a steady upwards progression of humanity, King said he thinks that humanity’s progression rises and falls, sometimes even staying in a negative dip for centuries. The country’s current dip, according to him, has a lot to do with the upcoming election, noting that it is so significant that The Atlantic even made a rare presidential endorsement. “Since 1856, [The Atlantic] said there were three times in human history that they felt they needed to get involved,” he said. “One was the Civil War, one was the Civil Rights Movement, and one was last week.”

Speaking to a standing-room-only crowd largely made up of students, King said he was, however, confident in young peoples’ commitment to social justice and concluded the talk with a call to action: “It’s incredibly difficult to understand where you are in human history because you’re just living there,” he said. “We will stay [in this dip] for as long as our effort or lack of effort keeps us here.”

The event was part of the Community Conversations and Actionable Solutions initiative on campus. It was co-sponsored by the Office of the President, the Office of Multicultural Affairs, the Bi-College Program in Africana Studies, the John B. Hurford ’60 Center for the Arts and Humanities, the Center for Peace and Global Citizenship, the Provost, the Ethical Leadership Initiative, and the Distinguished Visitor’s Fund.