On Saturday, Haverford’s Center for Peace and Global Citizenship (CPGC) welcomed students from across the Tri-Co to “Refuge: Seeking Peace Under Uncertainty,” a daylong workshop that examined the historical, legal, and psychological factors that play into the lives of those who are displaced by conflict.

The workshop was facilitated by Arancha Garcia del Soto, an expert on international humanitarian work and programs aimed at populations affected by violence who has engaged in person-to-person work with refugee populations around the world. She was last on campus during a semester-long residency as the CPGC’s global leader for peace, during which time she taught a class, “World Conflict and Humanitarian Studies: Critical Theory and Alternative Actions,” and lead workshops that aimed to internationalize the campus’ perspective on humanitarian theory and practice. Her workshop on Saturday was also designed to broaden perspectives, this time specifically regarding the lives and needs of refugees.

“Talk to the experts,” implored Garcia del Soto. “Who are the experts? The refugees themselves.” 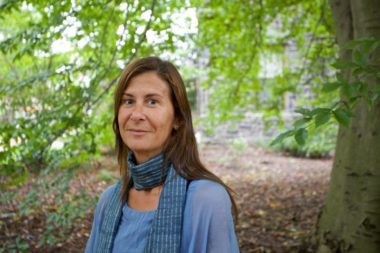 The event featured a lecture-based portion and an interactive section, in which participants were asked to envision policy solutions to issues that face various populations of refugees. In her lecture, Garcia del Soto stressed that in order to pragmatically improve the situations of refugees, it’s important to consider all the actors and contexts that play into each individual case of conflict-related displacement.

“Things are gray, they are neither black nor white,” she said when describing the need for both emergency relief and long-term development for refugees, which are both subject to change depending on the different cultures, conflict, and demographics that are involved in any one case.

Another challenge that faces refugee populations worldwide, she explained, is the invisibility of refugee lives and struggles, or the reductions of complex realities to numerical statistics.

“It’s hard to get close to these ugly, complex realities,” she said. “[People] know there is something going on with refugees in Europe, but really they are clueless.”

By the end of the session, attendees left with an expanded understanding of what factors are involved in confronting the challenges of refugees, as well as ideas about how to confront them. Although participants were made more aware of the current dire worldwide refugee crisis, the mood of the room was one of hope that change would come at the hands of those who embraced a more comprehensive understanding of the lives and struggles of the displaced.