Though some athletes and international students arrived earlier, Aug. 24 marked the official beginning of the Class of 2020’s Haverford career. On Move-In Day, these newest members of the Haverford community got settled into their homes on campus, said goodbye to their families, and started to get to know their new friends in their Customs groups. (They were also greeted by the College’s unofficial mascot, the Black Squirrel, who even helped unload a few cars.)

Customs, Haverford’s unique first-year experience program, kicks off with its five-day orientation program, which is designed to introduce the newest Fords to the College campus and community. In addition to all the tours, information sessions, and discussions designed to acquaint them with the College’s policies and resources, the schedule featured fun events such as a trust walk, a class tree planting (courtesy of the Haverford Arboretum), a scavenger hunt, a performance by a hypnotist, dinners with Bryn Mawr College “cousins,” a carnival featuring sno-cones and a bounce house, and a “supa fun” dance.

The annual demonstration of residence hall pride (and unusual student abilities), Dorm Olympics was held on Sunday. The green-clad contingent from Gummere emerged victorious this year, but, really, when your classmates are covered in cheeseballs, isn’t everyone a  winner? (More on the Class of 2020 below.) 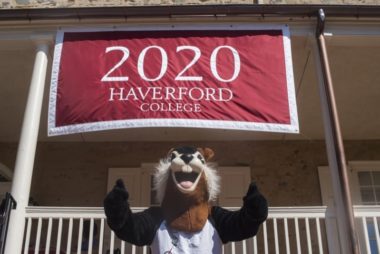 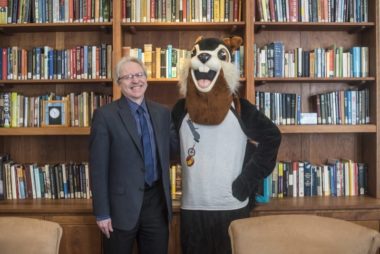 President Benston and the Black Squirrel: a meeting of the minds. 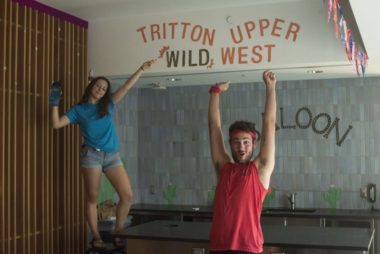 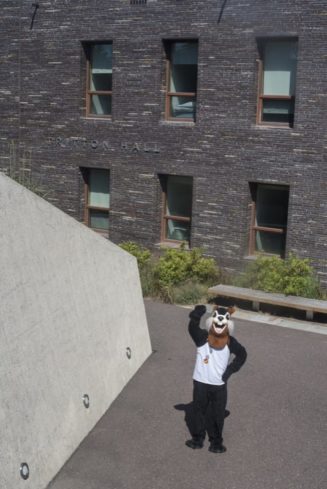 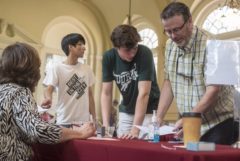 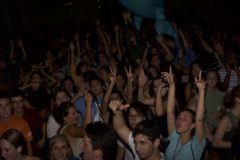 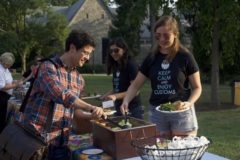 Dodging obstacles on the trust walk 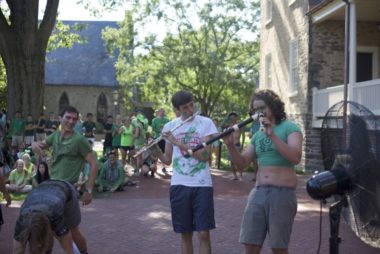 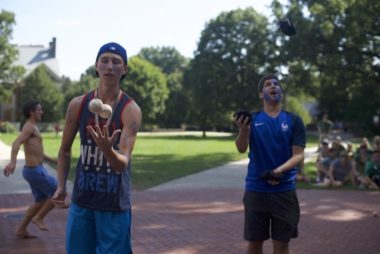 The many talents of Team Barclay

The musical talents of Team HCA/Tritton

The Class of 2020 is Haverford’s largest ever, with 351 members, but it was also the most selective—thanks to a record number of applications and the lowest admit rate in the College’s history. Its members hail from as close by as Bryn Mawr, Pa., and as far away as Kull-uh-way-uh, Hawaii; Shanghai, China; and Bangalore, India. They represent 36 states, the District of Columbia, Puerto Rico, the US Virgin Island, and Guam, as well as 17 foreign countries. 37 percent identify themselves as a person of color, 22 percent come from a family where one or both parents did not attend college, and 25 percent speak a language other than English at home.

The massively accomplished class includes the co-creator of a sports-writing website for and by high school and college students, a defensewoman from a state semifinalist boy’s ice hockey team, a singer who performed with the Broadway cast of Matilda, an advocate for nonviolent youth offenders in a restorative justice program in Maine, a co-author of a research paper on bullying, a co-founder of a stock market-based research and analysis website, a voice actor for Hasbro toy commercials, a player on the Oakland A’s fall scout team, a designer and patent-holder for a headset that will wake up a fatigued driver, a competitive gymnast who placed 40th in the nation last year,  an internationally ranked chess player, the top scorer in the world on the Cambridge Advanced Subsidiary level exam in psychology, and many, many other smart, talented, driven, compassionate learners and world-changers.

Join us in welcoming all of them to Haverford.