Among The Unburied, the latest exhibit to open in the Cantor Fitzgerald Gallery, is a trip not just around the globe, but through the very membrane that separates life and death. The show, which features two short films and a site-specific light installation, grapples with ghosts: Ghosts of the almost a quarter of a million Colombians who’ve died during five decades of internal conflict; ghosts Canada’s residential schools that were designed to wipe out the languages and cultures of its aboriginal peoples; ghosts left behind after Korea’s Japanese occupation and violent civil war. Among the Unburied tunes into the voices of the departed through works of three artist-storytellers: Mauricio Arango, Marianne Nicolson, and Park Chan-kyong.

On Friday, March 18, the Haverford community celebrated the exhibit’s opening with a reception and a talk by the show’s curator, Liz Park. The Bogota-born, New York-based Araungo was in attendance. His short film, The Night of the Moon Has Many Hours, is playing in one room of the gallery. On the opposite wall at alternating times Night Fishing, a short film by Korean artist Park Chan-kyong, plays. The gallery’s other space features a light installation by Marianne Nicolson. 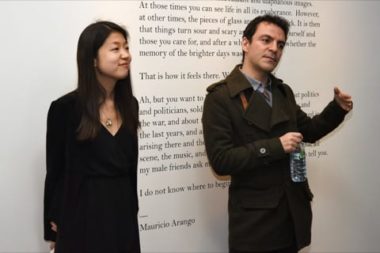 Curator Liz Park at the opening. Photo by Hina Fathima. 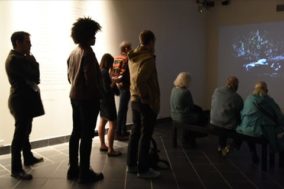 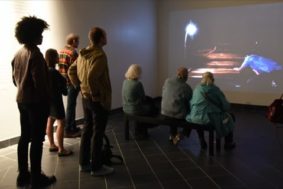 Among The Unburied will be on view through April 29. Interested in additional programming related to this exhibition? Another film by Park, Manshin: Ten Thousand Spirits, will be screened at the Bryn Mawr Film Institute on April 8 as part of the Hurford Center for Arts and Humanities’ Strange Truth film series. The filmmaker and curator will be on hand for a discussion with Hank Glassman, Janet and Henry Ritchotte 1985 Professor of Asian Studies at Haverford.