Since graduating from Haverford as a political science major in 1986 and earning his law degree from Rutgers, Vincent Warren has worked to advocate for civil and human rights. A former senior staff attorney for the American Civil Liberties Union, Warren is now the executive director for the Center for Constitutional Rights (CCR), where he oversees groundbreaking litigation and advocacy work. The center, based in New York City, has successfully litigated the “stop-and-frisk” policy of the New York Police Department, represented Guantanamo detainees, and challenged National Security Agency surveillance, as well as solitary confinement practices at Pelican Bay Prison in California. In the wake of the Michael Brown shooting, Warren was on the ground in Ferguson, Mo., where he helped to create the Ferguson Legal Defense Committee and the national Law4BlackLives cohort.

Warren returned to campus last week at the invitation of the Multicultural Alumni Action Group (MAAG), a group founded a year ago to build connections between alumni and students to ensure Haverford is an inclusive community where all can thrive. He spoke to a packed Stokes Auditorium filled with Bi-Co students, faculty, and alumni, about “visionary activism,” the BlackLivesMatter movement, and the tensions between human rights demands and the way we currently think about justice.

Warren’s talk was preceded by an introduction by MAAG Co-Chair Rashidah Andrews ’02 and a moment of silence lead by Alliyah Allen ’18 in honor of MarShawn McCarrel, a BlackLivesMatter activist who recently took his own life on the steps of the Ohio statehouse. Warren was introduced by Sarah Willie-LeBreton ’86, a former classmate and current Swarthmore sociology professor. Willie-LeBreton told the assembled crowd that she first met the evening’s speaker outside of Gummere when they were first-year students and that their friendship grew as they worked together on the South African divestment movement during apartheid. Warren, she said, continues to live out his values in his work.

“True to his Haverford identity,” she said, “he has found a way to lift up the secular version of the Quaker belief that there is that of God in every person.” 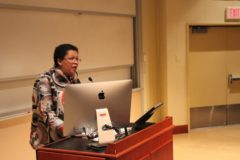 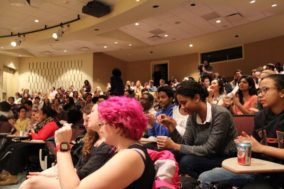 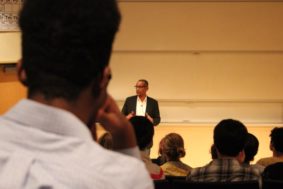 When Warren took the stage, he spoke about his work in Ferguson, the exhausted activists he met on the front lines, and the creation of the Ferguson Legal Defense Committee, which used volunteer lawyers trained by the CCR to represent those arrested and took to the media to spread the word that the response to Brown’s death was a “righteous protest” and not a riot led by vandals as some accounts painted it.

“I am a very peaceful person, and Haverford was in my blood at the time—Haverford values course through my blood today—but I have learned something about nonviolence,” Warren told the assembled crowd. “In the context of state violence, nonviolent resistance is actually cast as violence.”

Warren also talked about the BlackLivesMatter movement beyond Ferguson, calling it “an innovative new way of thinking about the structures that contain us.” He argued for the importance of imagination and vision in activism and in creating policy change, and noted that the transformative piece for the movement will be fiscal—convincing politicians to spend money on services for communities and divesting from those that perpetuate racist power structures. “Budgets are nothing but expressions of our values through money and priorities,” he said, suggesting that with the right combination of imagination and solidarity anything could happpen. “You have to be able to see a world where childcare has the highest amount of money in a county or state budget,” said Warren, offering one example.

The lawyer and activist also talked about his time at Haverford, which he acknowledged can sometimes be an insular environment. But it is also a respectful place, he said, and he cherished his time here.

“The Haverford community is one of the most supportive communities I have ever been privileged to be a part of,” Warren said. “It’s not perfect now, it wasn’t perfect when I was here. But the bubble that we’re in, the benefit of being in that bubble, is that we’re us.”

Photos by Will Herzog ’19