Today (Monday, Feb. 8) marks the first day of the Chinese Lunar New Year. And because the Chinese calendar assigns each year a title animal from a rotating list of 12, that means it is the beginning of the Year of the Monkey.  On campus, different student organizations welcomed in the Year of the Monkey with food. On Sunday evening, the Haverford Asian Students Association held a Lunar New Year banquet in Founders Great Hall, and earlier in the weekend, the Global China Connection (a campus affinity group), held a monumental dumpling-making event.

At the latter event, on Saturday, Feb. 6, roughly 40 people gathered in the Multicultural Center (MCC) in Stokes to make— and eat— over 1000 dumplings. (The large number was chosen to beat the number of dumplings created at a similar gathering at Swarthmore College last year.) The ambitious crew attempted several different stuffings, including traditional pork; beef, mushroom, and shrimp; vegetarian; and even a dessert variety featuring bananas and Nutella. Students then demonstrated how to fill, steam, and fry the delicious dumplings.

As fun as the dumplings were to make, they were even more fun to eat! 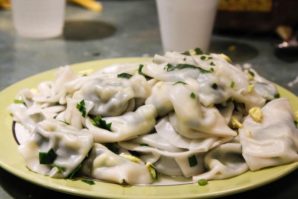 Yilin Li ’19 and Sipeng Zhou ’19 count the dumplings to make sure they beat Swat!