Just before Thanksgiving, Lunt Basement hosted the third annual Smokin’ Mic Night, a standup comedy show organized by members of Haverford’s comedy scene that gives all Haverford students an opportunity to write and perform their own routines.

The event was originally produced in Spring 2014 by members of the Lighted Fools, who wanted to offer students an opportunity to perform comedy outside of the sketches and improvisational pieces performed by their group and The Throng, another Haverford comedy group that focuses on improv. Although the show often includes members from the two comedy groups, it is also open to all Fords and draws some students who have no other outlet for their comedy performance.

“It’s really awesome to see people who you don’t know very well come in and bring some really strong ideas for material,” commented Peter Durlacher ’17, a member of the Lighted Fools and a principal organizer of the event. 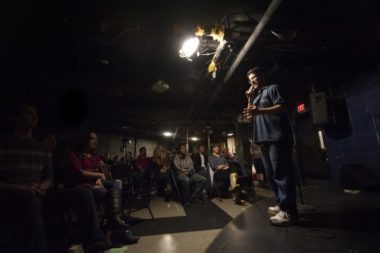 Will Fox ’19 tells his jokes

George Ordiway ’16 during his set 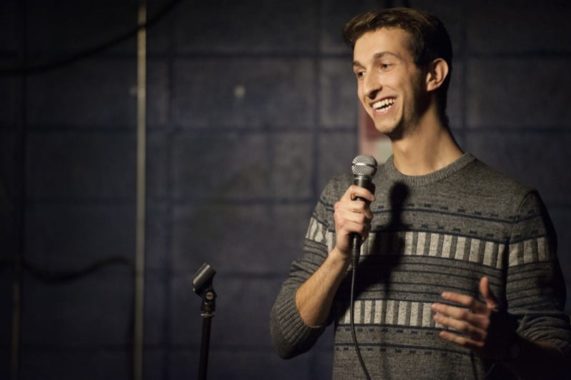 The show’s “material” of the show was birthed workshopping process that took place over roughly a month leading up to the performance. The first workshop, Durlacher described, was for “throwing ideas around… to have a collaborative space,” which fostered a constructive environment in which to create. The second workshop involved grouping jokes into a routine and adding cohesion and flow to the performances, and the third polished the acts further. All performers participated in at least two of the workshops so that come showtime, all acts were ready to draw laughs.

“For the people in a group, it’s an opportunity to do more than just improv,” said Durlacher. “Improv and standup comedy and sketch comedy and making videos are all very different kinds of comedy.”

In just a couple years of existence Smokin’ Mic Night has become a beloved tradition. At the most recent show, Lunt Basement was packed with Fords who showed up to watch and support 13 performers—the most ever featured. In fact, the event has become so popular that, though previous iterations were held only in the spring, organizers added a fall semester event as well, something Durlacher says that he and the other organizers aim to continue.