Every summer for the past four years, Haverford has welcomed a very special cohort of incoming first-years to campus a little early. The John P. Chesick Scholars, a group of exceptional students who are either from underrepresented or under-resourced backgrounds or are the first in their family to attend college, arrive on campus during its hottest months for a five-week residential program designed to introduce them to and prepare them for the rigors of Haverford.

During their time on campus, these 15 students take two college courses—one quantitative or scientific and another writing-intensive one—chosen from a list of four. This summer’s choices were “Applied Statistics,” “Thinking Syntactically: Introduction to Linguistics,” “A Quaker Learning: A History of Social Justice,” and “Reproduction or Mobility: Analyzing Social Class Theory Through Ethnographic and Empirical Research in Schools.”

On July 31, this year’s group of Chesick Scholars, which includes new Fords from as far away as California, Idaho, and Puerto Rico, gave presentations on their research for two of those courses. 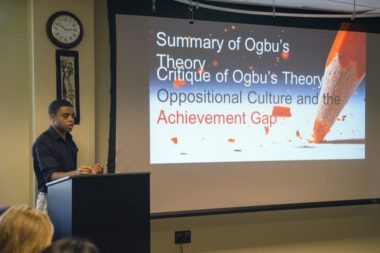 Tania Ortega ’19 researched the impact of class and race on a school’s pedagogy and curriculum.

Students in Lecturer Heather Curl’s “Reproduction or Mobility” class, which offered an introduction to social science research and explored social class as it relates to education, gave multimedia presentations on the topics of their final research papers. Students were invited to come up with their own subjects and explore areas of personal interest, and were required to conduct at least one interview as part of their work. Presentations covered a wide range of issues from John Ogbu’s Theory of Oppositional Culture to minority experiences at elite prep schools and the influence of citizenship on one’s ability to access higher education.

The Scholars who chose Emeritus Professor Emma Lapsansky-Werner’s Quaker history course presented work done with the Cope-Evans Family Papers in Haverford’s Special Collections. These letters document the lives of two prominent Philadelphia Quaker families who were influential in their roles as merchants, philanthropists, and educators during the 19th and early 20th centuries. Jordan Parra, from Miami, Fl., gave dramatic readings of Henry Cope’s letters through his lifetime, starting with one he wrote when he was just seven years old, while Philadelphia’s Matthew Ridley explored the differences in the education of young Quakers versus that of freed African Americans post-Civil War through the correspondences of cousins and educators Francis Reeve Cope and Clementine Cope.

“I was definitely satisfied with the Chesick Scholars Program,” said Ridley. “From my experience, there is a clear difference between being told that college is different from high school, and actually having the experience of taking classes. The latter is a more active approach to education, and the Chesick Program was instrumental in helping me become aware of the support resources I have on campus.”

“This is a very accomplished cohort of emerging scholars, who showed great energy and passion for their studies this summer,” says Jeff Tecosky-Feldman, director of the Chesick Scholars Program. “As this is the fourth cohort, we now have Chesick Scholars in every class at Haverford! I have no doubt these new students will become academic and social leaders like the Chesicks who came before them.”

Though the summer program is now over, the Chesick Scholars’ journey at Haverford is just beginning. These students will now officially begin their first year of college and, as a Chesick Scholar, will receive an intensive, one-on-one mentorship for the duration of their time at Haverford.