The honeybee hives, which were installed in May in the Retention Pond behind HaverFarm, were the idea of the Haverford’s BeeKeeping Club, which was formed by Alanna Matteson ’15 and Dana Ducombe ‘17 earlier this year. But with most of the club members away for the summer, St. Amour (who is a student at St. Joseph’s University) and Kent will keep an eye on the Haverbees for the next three months. 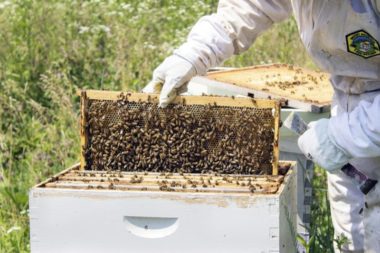 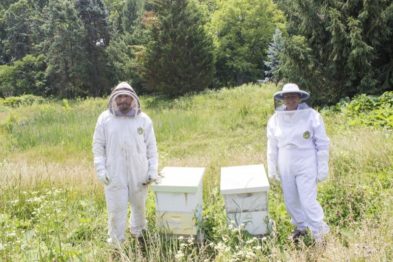 From left: St. Amour, the hives, and Kent 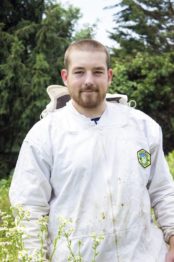 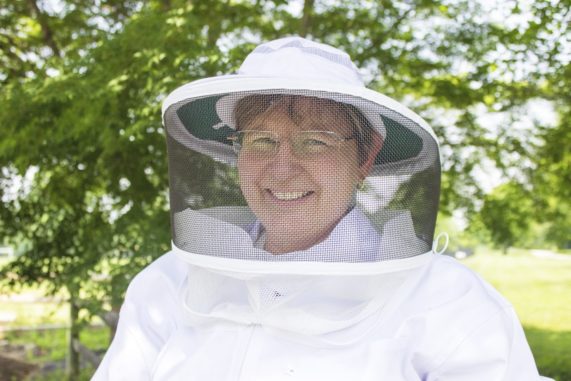 With its inception, the Club joins a larger national effort that’s working to restore the population of honeybees in the country. Bees are extremely important for the growth of agriculture and crops. They help pollinate farms, gardens, and a significant portion of all fruits and vegetables produced. However, the population of honeybees in the United States has drastically declined over the last decade to a condition called Colony Collapse Disorder (CCD). CCD results in a demise of worker bee population, and leaves only the queen and immature bees present.

“Having beehives on campus will not solve the issue of Colony Collapse Disorder, but it can help maintain bee populations in the area,” says Kent, who is a beekeeping apprentice. While she acts as a liaison between the College and St. Amour, who owns the hives, bees, and honey, she also hopes to provide continuity from year to year for the student-run club.

Last week Kent and St. Amour checked on two deep supers, brood boxes for bees that each contain ten frames, to determine if the bees were healthy. St. Amour returned later in the day with additional hive boxes for the beehives to have more space to expand.

Hopefully the Haverford bees will help pollinate the College Arboretum, HaverFarm, and the student and local gardens. Additionally, if you’re a honey lover, keep a lookout for the first Haverbee honey harvest near the end of the summer!

Read Katie Greifeld’s article on The Clerk for more information about the Beekeeping Club.