How do we use our civic spaces to have cultural conversations? That’s just one of the questions asked by the Monument Lab, a public art and urban research project that ran at Philadelphia’s City Hall for three weeks and ended this past Sunday. The project was the brain child of Postdoctoral Writing Fellow Paul Farber and two collaborators (Ken Lum, an artist and professor at the University of Pennsylvania, and A. Will Brown, a curatorial assistant at the Rhode Island School of Design Museum) and was funded by a Pew Center for the Arts and Heritage grant. The Lab, which was housed in a shipping container in the courtyard of City Hall from May 15 through June 7, welcomed artists, activists, and the public to share ideas for new hypothetical monuments for present-day Philly.

“Their proposals bridged past, present, and future visions of the city,” says Farber. “Visitors demonstrated an appreciation for traditional forms of civic monuments, but also sought adaptations appropriate for our times– especially to address issues of inequality, social division, environmental crisis, and the privatizing of public space.”

The Monument Lab space included a prototype monument, a wooden classroom (featuring benches and an empty chalkboard frame) proposed by artist Terry Adkins before his death as a response to education funding cuts that have impacted the city so monumentally in recent years. And it also played  host to a lunchtime speaker series, which welcomed civic leaders, artists, and academics, including Haverford faculty members Helen White (chemistry) and Willie Williams (fine arts), to explore its central question on a near-daily basis.

“The courtyard proved to be a fascinating site for pedagogy and shared inquiry, a window into the possibilities and challenges for the city, and a generative place to weigh Philadelphia’s evolving history,” says Farber. 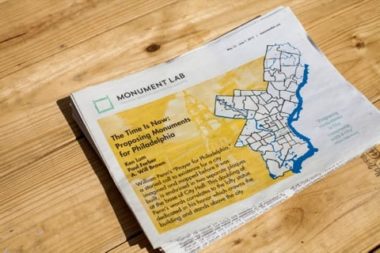 Co-creators Farber (left) and A. Will Brown at the opening 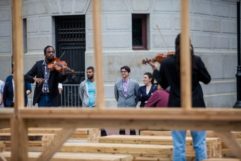 Music students from Masterman High School perform at the opening 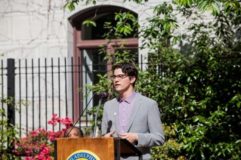 Paul Farber speaks at the opening 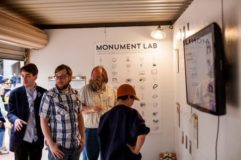 It wasn’t just Haverford faculty members who were involved in this experiment. From the Digital Scholarship Fellows in the Library, who helped Farber research case studies, to his own students, who conducted exercises on curricular field trips to contribute to a long list of monumental sites and forms he created, Haverford was present in the Lab.

“Four Haverford students worked on site,” says Farber. “My former students Alliyah Allen ’18 and Freda Coren ’17 worked the entire three-plus weeks of the project, and Rebecca Fisher ’17 and Alison Love ’18 helped out in generative ways as well. Each student impressed me with their commitment to engaged research, creativity in encouraging visitors to the lab at City Hall to propose monuments, and their ability to be present with the complex public space of City Hall in order produce knowledge collectively. They interacted with a diverse range of attendees and welcomed their ideas. Later, they transcribed and analyzed the data we collected on-site, and kept field journals of what they learned about this prominent civic crossroads. Their research will be included in the exhibition of Monument Lab’s final results during Design Philadelphia at the Center for Architecture this October and on the website’s research page.”

The Monument Lab was quite popular with visitors to City Hall and garnered a lot of interest from the press. You can read more about the project in The Philadelphia Inquirer and the Philly Voice, or listen to one of the two appearances Farber made on WHYY’s Newsworks to discuss it. 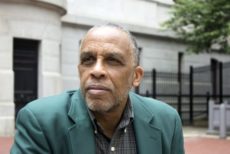 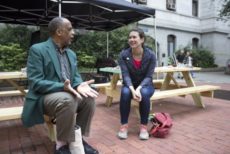 Williams and White in conversation 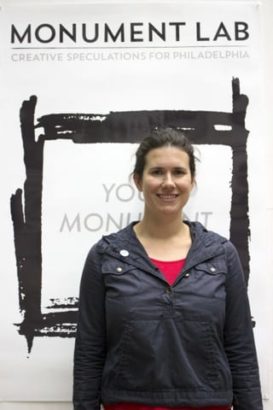 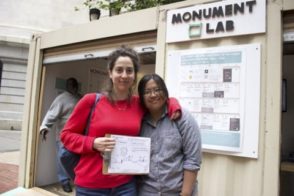 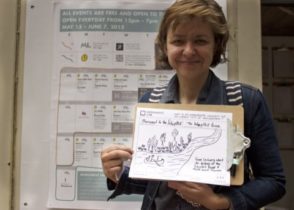