Last weekend campus played host to the second annual Tri-Co Hackathon, a 48-hour marathon of pizza, brainstorming, coding, and more for students from Haverford, Bryn Mawr, and Swarthmore. After a successful inaugural year, in which 60 students from the three schools participated and a contextual language-learning app was crowned the winner, the Hackathon returned to Haverford with an expressed goal of producing web or mobile apps that address a social or environmental problem in the Tri-Co community or beyond.

10 teams participated and created apps for a diverse array of product prototypes from an app to prevent food waste to one that alerts you when you’re in a poor air quality area to a new and improved online course guide for the three Colleges.

The winners were chosen by an esteemed panel of judges, including Morgan Berman, founder and CEO of MilkCrate, a Philadelphia startup that promotes sustainable local living; Lloyd Emelle, co-founder of Hyaline Creative, a Philadelphia design and development firm, and co-captain of Code for Philly; Yael Lehmann, executive director of the Food Trust, a nonprofit organization that seeks to bring healthy, affordable food to underserved populations; Gabriel Farrell, civic technology engineer for the City of Philadelphia; Helen White, assistant professor of chemistry and director of the Environmental Studies Program at Haverford College; and Dan Giovannelli ’12, a software engineer at Google.

The judges singled out four winners and an honorable mention for notice. The overall winner, which earned a $650 prize, was ReportIt, an app by three Swarthmore students that enables people to identify public infrastructure issues on a map, which then get reported to a local government office. The design winner, created by five Swarthmore students, was Tri-Co Bookworms, a better way to buy and sell used textbooks. The “potential impact” winner was Team Baldwin, made up of two Bryn Mawr students who made an app for visualizing Philly crime data.

Five Fords, Gabe Rybeck ’16, Jason Feinberg ’16, Casey Falk ’16, Blair Rush ’16, and Brandon Smith ’16, were honored for their Tri-Co Course Guide, an improved online course guide for the three colleges that uses a new course catalog API, as “technical implementation” winners. And another five, Anh Nguyen ’16, Julie Ta ’16, Dan Hopkins ’16, Phillip Lu ’15, and Hector Uriostegui ’16, earned an honorable mention for their app, U Up, which allows people to see who else on their campus is awake an any given time. 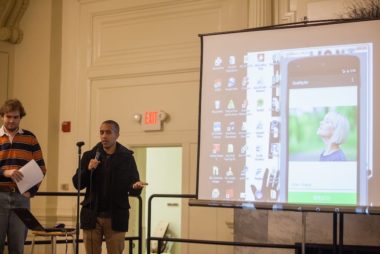 Dawitt Habtemariam ’15 presents his app, Quality Air, which alerts users when they enter an area with poor air quality.

Students present a revamping of the Haverford Course Catalog at the Hackathon. 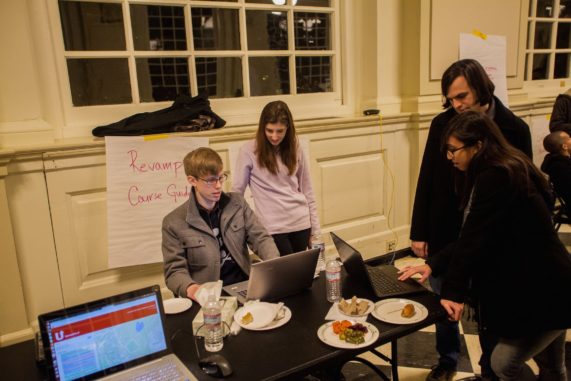 The Haverford students on team U Up at work.

The hackathon was made possible with generous support from Curalate, NVIDIA, and various departments at Haverford, including the Office of the President, the Department of Computer Science, the Libraries, the John B. Hurford Center for the Arts and Humanities, Instructional and Information Technology Services, and Tri-Co Digital Humanities.

Read more about the 2015 Hackathon in The Philadelphia Inquirer.